No other state in the U.S. matches the impressive history of steel buildings in Illinois. Architects and builders in Chicago pioneered many of the early techniques which led up to today’s pre-engineered metal buildings.

Steel building in Illinois: A History of Innovation 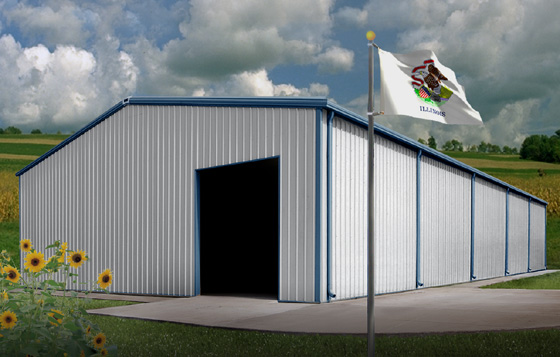 Look at a brief timeline of the events which brought about the evolution of steel building in Illinois— and the rest of America:

1885: The world’s first skyscraper is completed in Chicago. The ten-story Home Insurance Building is the first structure using a steel and iron self-supporting frame.

1889: The Rand McNally Building in Chicago becomes the first all steel-framed skyscraper.  For many years after, all-steel framed structures were known as “Chicago Framing.”

1893: The World’s Columbian Exposition in Chicago celebrates Columbus’ discovery of the New World. The 633 acre Exposition embraced many progressive building techniques in its 14 main buildings, which included 18,000 tons and steel and iron. Over 25% of the entire population of the U.S. visited the Exposition.

1933: Chicago hosts the World’s Fair, which included a Homes of Tomorrow exhibit featuring a steel-framed home. Good Housekeeping and Stans-Steel worked together to create a house that would be fireproof, prefabricated, and affordable. The completed house was a modest 1,300 sq. ft. and sold for about $7,500.

1940s: During World War II, steel buildings are developed and mass-produced to ship overseas in support the war efforts. These “Quonset huts” were quick to manufactured, easy to ship, and simple to erect where needed. After the war, prefabricated steel buildings began spreading into the local agricultural markets, including steel buildings in Illinois for farmers in the state.

The benefits provided by strong and durable RHINO steel buildings in Illinois include the following:

Fire Resistance: Steel framing never becomes the first-ignited origin of a structural fire. Wood framing often sparks as the origin of fires. Steel will never add fuel to a fire as wood framing does. Well-grounded steel buildings resist lightning damage, too. Consequently, most people receive significant discounts on insuring their metal buildings in Illinois— and elsewhere.

Earthquake Resistance: Most earthquakes in the state to date have been small to moderate. It is comforting to know that any RHINO metal buildings in Illinois provide built-in resilience against earthquake damage.

Age Resistance: Time takes its toll on all of us— and on buildings. However, no other construction material ages as gently as the RHINO metal buildings— and with practically no maintenance! Our prefabricated steel structures go up straight and true— and stay that way over decades of use, preserving the resale value of the structure.

Call RHINO today at 940.383.9566. Discuss your aviation, agricultural, commercial, or industrial building project now with one of our knowledgeable and friendly steel building advisers. Get a free estimate and complete details on metal buildings in Illinois today!