Why a Steel Airplane Hangar is the Best Protection 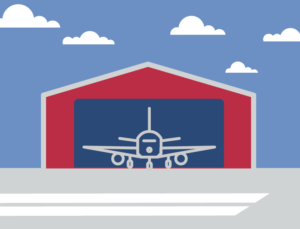 A prefab steel airplane hangar shelters an aircraft from the elements.  In addition, sturdy metal hangars protect mechanics as they perform crucial safety checks and maintenance.

After all, a plane is a sizeable investment.  Naturally, you want the strongest shelter possible for the security of such a valuable asset.  And the best protection is a prefabricated hangar from RHINO Steel Building Systems. 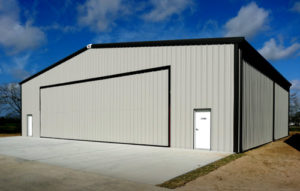 Ever since man began dreaming up ways to fly, he has needed a place to repair and protect his flying marvels.  Thus, plane hangars were born.

Unfortunately, they built their landmark hangar with wood.

After completing the construction of their Wright Flyer in Ohio, they returned to find their wooden hangar in North Carolina destroyed by storms.

It is easy to see why engineers so quickly switched to metal hangars.

Today, everyone knows steel is far stronger than wood.

Steel’s superior strength allows spans of much greater distances than a wood building.  That’s why steel is the material of choice for bridges, mega-warehouses, large manufacturing facilities— as well as aircraft hangars.

Actually, steel was the material of choice for the massive hangars needed for the early dirigibles.

For example, “Hangar No. 1” built in Lakehurst, New Jersey is framed with steel.  Constructed in 1921, this monster structure contains 211,000 sq. ft. of floor space.  Equally shocking, it soars to an amazing 172’ in height.

Almost 100 years later, Hangar No. 1 still exists.  In fact, it is a registered national monument.

What a testament to the functionality, versatility, and durability of steel!

(Check out this incredible video about the construction of the USS Shenandoah in Hangar No. 1.)

The Many Advantages of a Steel Airplane Hangar 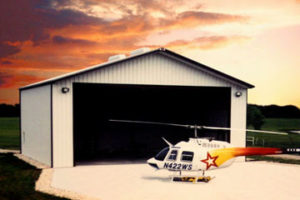 The Versatility of RHINO Metal Hangars

Customize your hangar with massive doors, overhead cranes, or mezzanines.  Whatever you need to make the building right for your aviation application, you will find it at RHINO.

Furthermore, you may order all our hangar doors with additional wind resistance up to 145 mph.  Insulated doors are also available.

Other quality-conscious metal building options to consider include:

Nothing beats a RHINO-tough airplane hangar for guarding your aircraft from harm.

Let RHINO design an affordable steel plane hangar for your specific needs.  Our metal hangars and metal buildings will meet or exceed all your current local building codes for the lifetime of the structure— guaranteed.

Your aircraft deserves the best protection available—and that is RHINO’s steel structures.  See The Rhino Difference for yourself.