Metal Tools Were Essential for the Pilgrims’ Progress in America

The first settlers in America forged a country with their faith, fortitude— and with their iron and steel implements.

As we approach the Thanksgiving holiday, let’s spend a few minutes exploring the tools the Pilgrims and the Jamestown settlers used to carve a New World out of a wilderness.

You Gotta Take It with You 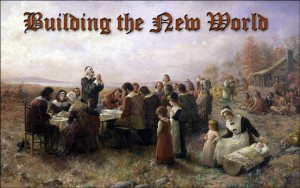 The early settlers left friends, family, and the familiar behind to journey into the unknown. Necessity demanded they bring only the most indispensable items with them.

While no cargo list for the Mayflower exists today, Captain John Smith (famous for having his life saved by Pocahontas), created a pamphlet of suggested items each settler should pack for life in the New World. Historians assume the provisions for the Mayflower voyagers would have been similar.

Captain Smith’s provision list included clothing, bedding, household items, and foodstuffs— as well as these implements made of iron and steel:

ARMS: Complete set of light body armor, a long-barreled musket, and a sword with a belt.

COOKWARE: One iron pot, one kettle, one large frying pan, one gridiron, and two skillets.

(Notice the list of tools does not include a plow. The first cast-iron plow was not invented until 1797.)

Fighting the Elements for Survival

Delays caused the Pilgrims to arrive at Plymouth in December 1620. Building adequate shelter against the freezing weather was a matter of survival. Speed was imperative.

The men immediately began chopping trees with their iron and steel tools. They built very small homes— both because of time constraints and their certainty that they would soon be moving again.

Half the Mayflower colonists fell ill and died during that first frigid, brutal winter.

Indians Fascinated by Iron and Steel

On March 16, 1621, the Abenaki chief Samoset— whose name meant “he who walks over much”— was the first Native American to greet the newcomers at Plymouth. To their shock, Samoset walked into the settlement and greeting them in in their own language, saying, “Welcome, Englishmen!” (Samoset learned English from fishermen who visited the coastal waters near his home.)

Acting as a goodwill ambassador, Samoset introduced the Europeans to Squanto, a representative to the whites sent by the Wampanoag chief Massasoit. Surprisingly, Squanto spoke English very well. Earlier, Squanto had been kidnapped by Europeans and taken to Spain and England, before finally returning to his native land.

Having had no prior access to iron and steel, American Indians quickly saw the superiority of iron and steel implements. Setters discovered any additional metal tools or cookware were premium trading items with the Native Americans.

Today, 408 years after that first landing at Jamestown and 395 years after the Mayflower landing at Plymouth, the iron and steel industry continues to provide modern Americans with the tools needed to forge their own American dreams.

The most recycled material on the planet, steel touches every facet of American life.

Steel cans preserve our foodstuffs. Steel appliances simplify our household chores. Steel railway cars, ships, and trucks deliver the products we buy. Steel automobiles transport us wherever we need to go down roads strengthened with steel rebar and across bridges framed with steel. Steel frames many of our barns, hangars, homes, stores, stadiums, and other buildings across this great land.

This is an exciting time to live!

For those of us at RHINO, Thanksgiving will be a time to be grateful for family, friends— and for the jobs we love, selling pre-engineered steel buildings all across North America.