What Worked—and What Didn’t

One year after the devastating Mexico City earthquake, rebuilding continues.  The 7.1 tremblor rocked not only buildings and lives, but also construction guidelines and governmental policies. 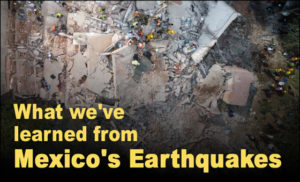 Although far less deadly than the 1985 tremblor, the 2017 quake also took a severe toll.  According to data from the U. S. Geological Survey (USGS), over 360 people perished in the 2017 event.  Another 6,000 people sustained injuries.

The 2017 quake rated 7.1 on the Modified Richter Scale and VIII on the Mercalli Intensity Scale.  The 1985 megaquake hit 8.1 on Richter and IX on Mercalli.

Why the 2017 Quake Caused So Much Destruction

SOIL:  Mexico City rests on the worst possible soil for strong earthquakes— an ancient lakebed.  This type of soils actually amplifies the shaking power of a tremblor.  Experts compare the results to a glob of gelatin quivering on a plate.

DISTANCE:  Naturally, the distance from the epicenter of a quake affects intensity too.  Surprisingly, distance also determines the type of structures that receive the most damage.

COMPLACENCY:  Following the desolation of the 1985 earthquake, Mexican officials enacted stringent building codes— at least on paper.  Unfortunately, there seems to be little follow-through on the tougher regulations.  Corruption runs rampant in the system; developers routinely circumvent the codes.  A 2016 study found 71% of new building construction failed to meet existing guidelines.  Builders often choose substandard building materials to save money.

Especially troubling is the number of concrete structures with little or no supporting steel components.  These buildings account for many of the collapsed structures in 2017 quake.

At this posting, Mexican builders have replaced and repaired about 85% of the structures damaged in the 2017 quake.

Builders south of the border should consider using more low-rise steel buildings for their commercial and industrial structures.  Pre-engineered steel buildings perform well in earthquakes.  They also stand up well to the high winds and heavy rains endured by Mexican hurricanes.