The performance of pre-engineered steel buildings in earthquakes is nothing short of amazing.

How do we know? 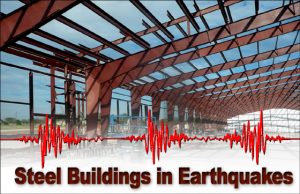 Building code officials and structural engineers study the performance of various building types under duress.  After every natural calamity, they examine which buildings failed and which withstood the stresses forced on them.  Their goal is to insure life safety in the event of extreme conditions.  Consequently, they take what they learn from natural disasters and amend building codes to make buildings safer.

There were no steel building collapses during the Northridge Earthquake.  However, building officials were concerned over the buckling, brace fractures, and cracked beam-to-column connections in some welded steel structures.  Consequently, requirements for steel buildings in earthquake-prone areas increased dramatically.

Testing the Limits of PEMBs in Earthquakes

Earthquake simulations were needed to demonstrate the effectiveness of pre-engineered metal buildings (PEMBs) during tremblors.  In 2010, the American Iron and Steel Institute (AISI), the Metal Building Manufacturers Association (MBMA), and the Network for Earthquake Simulation (NEES), teamed with the University of California at San Diego to put PEMBs to the test.

The first test frame featured a typical tapered steel framing bay with girts, purlins, and steel sheathing on the roof and sidewalls.

The third test frame again employed precast concrete walls.  It also included a mezzanine second floor system— loaded with concrete— over one portion of the structure.  (Mezzanine floor systems for PEMBs are designed to carry their own load.  Consequently, the steel framing does not need to be re-engineered to carry a second floor system.)

Sensors, measuring the effects of the simulated quakes, covered the steel frames.

The goal of the testing was to find the earthquake magnitude needed to collapse each structure.

Although the engineers pushed the limits of all three to the max— an earthquake level likely to happen only once every 2,500 years— none of the three test frames ever collapsed.

At 250% of the original earthquake’s strength, a slight deformity in a rafter occurred, but the structure still did not fail.  When tested at three times the strength of the specific earthquake, fractures began appearing in the steel— yet the earthquake safe building continued to stand!

At this point, the tests were suspended— but only because they reached the limitations of the shake table’s hydraulics!

Given the results of these tests, is it any wonder that pre-engineered steel buildings dominate low-rise construction in the U.S.?

PEMBs are the only logical choice for low-rise buildings in earthquake-prone areas— or anywhere else in North America.  RHINO buildings will meet or exceed all current local buildings codes— including seismic codes— wherever you build.

Call RHINO today at 1.940.383.9566 for more information about earthquake-resistant construction.