How We Measure Earthquakes

When hearing about recent earthquakes, the first thing everyone wants to know is the quake’s magnitude.  Having a number to define the strength of the tremblor allows us to gauge how the quake compares to other historical earthquakes. 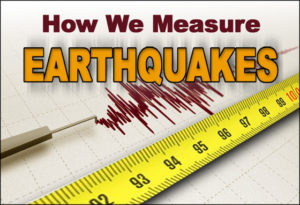 But what does the designated earthquake magnitude actually mean? Below are some earthquake measurement facts.

Seismographs are instruments used to measure the force and duration of an earthquake.

Milne theorized that earthquake waves might even be detected around the world.  Then in 1899, E. Von Rehbur Paschvitz’s seismograph picked up earthquake waves in Germany from a quake shaking Tokyo, Japan.

In the 1920s, American astronomer John A. Anderson, working with American seismologist Harry O. Wood, developed an improved seismograph.  In fact, Wood later spearheaded the installation of a seismograph network across Southern California.

Wood also hired Charles F. Richter to aid him in locating earthquakes in the region.

In 1935, Richter presented a scientific paper on his Local Magnitude Scale.  This was an attempt to define the “size” of earthquakes.  Richter applied a logarithm where each step in the scale represented ten times the force of the previous step.

However, Richter’s Magnitude Scale had several problems.  It was designed to measure medium-sized earthquakes for a range of about 400 miles.  It also using the Wood-Anderson seismographs.  Unfortunately, these instruments proved inaccurate when measuring larger quakes over 7.0.

In 1979, seismologists switched to the Moment Magnitude Scale (MMS) of measuring earthquake intensity.  Building on Richter’s scale, the MMS is now the accepted scale for larger earthquakes. 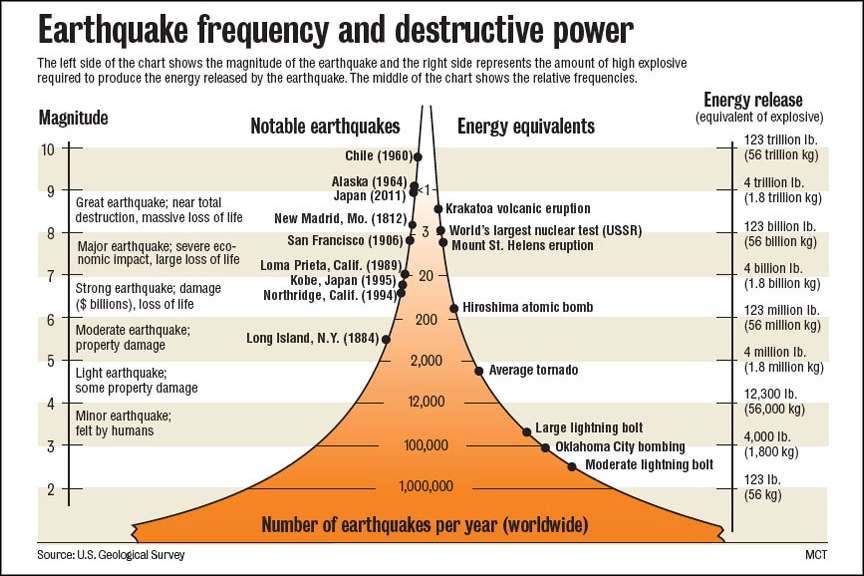 Both the Richter Scale and the Moment Magnitude Scale measure the amount of energy released by an earthquake.  On the other hand, the Mercalli Intensity Scale classfies earthquakes by the amount of damage inflicted.  It quantifies a quake’s effects on the land’s surface, people, and structures involved.

Today this twelve-level scale is known as the Modified Mercalli Intensity Scale.

Each earthquake has only one designated Moment Magnitude Scale rating.  However, the same earthquake could have many Modified Mercalli Intensity Scale ratings, based on the damage experienced in specific areas.

Building for Earthquakes with RHINO

Building code seismic provisions vary greatly across North America.  Each is based on the likelihood and possible intensity of an earthquake.  According to FEMA, “These seismic provisions represent the best available guidance on how structures should be designed and constructed to limit seismic risk.”

Fortunately, RHINO’s steel buildings qualify for building codes everywhere— even in earthquake prone areas.  Our structures meet or exceed all current local buildings codes— guaranteed for the lifetime of the structure.

Discuss your next building project with one of our experienced metal building specialists today.  They will answer all your questions, provide tips on improving your project, and supply a free quote.