Pre-engineered steel buildings for Pennsylvania make perfect sense. Who would be more conversant in the advantages of using steel for construction than the state literally built by the iron and steel industry? 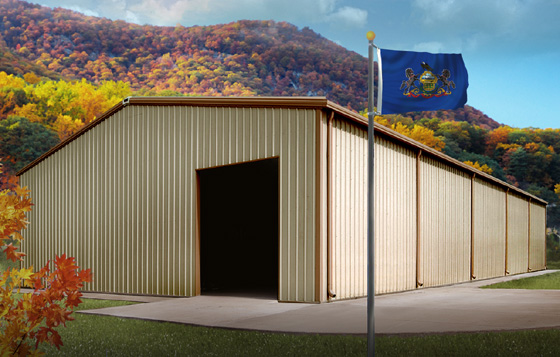 From the early 1830s to the early 1930s, Pennsylvania produced the most robust economy in the world. Iron and steel manufacturing, fabricated metals, and machinery led the charge into the industrial age.

Pittsburgh was known as “the steel capital of the world” in those days. At the turn of the last century, 360 iron and steel manufacturers operated in the city. Pittsburgh is still called the “Steel City.” It is also home to the six-time Super Bowl Champion Pittsburgh Steelers.

Pennsylvanians know— and love— the benefits of steel.

RHINO steel buildings for Pennsylvania meet these challenges. Our prefabricated metal buildings offer the strength and versatility needed there.

The winter of 2013-2014 produced 11 storms in Philadelphia, dumping almost five feet of snow on the city. RHINO metal buildings for Pennsylvania meet local snow loads. You can request even higher loads, if you desire.

Did you know that Pennsylvania ranks third in the U.S. for lightning damage? In a RHINO structure, the grounded steel framing conducts lightning strikes safely to the ground, preserving the property and offering metal building lightning protection. Wood framing resists the current of lightning, igniting. Fire is far less likely to start in a metal framed structure. Consequently, many insurance companies offer big discounts for metal buildings.

No termite can make a lunch of steel framing, eliminating another worry.

RHINO structures use only commercial-grade rigid steel framing. Our structures are guaranteed to meet or exceed all local building codes in North America— for the lifetime of the structure!

Mold and mildew can be a nuisance in highly humid areas. Unlike wood, steel is inorganic and does not support mold or mildew growth.

Steel spans much farther with less material than any other building material, maximizing the use of floor space. That makes pre-engineered steel idea for structures like:

While steel operations still flourish in Pennsylvania, the service sector now makes up 75% of the commonwealth’s work force. This market needs strong and versatile steel buildings for their commercial operations.

Commercial builders appreciate the time saved erecting a pre-engineered metal building for Pennsylvania. Everything arrives ready to assemble with bolts and screws. Since fewer pieces are required to build a stronger structure, the framing erection is fast-paced and simple. RHINO steel buildings work well for retail stores, offices, restaurants, and other commercial endeavors.

Individuals also enjoy the fast and easy assembly for their residential accessory buildings. Build detached garages, RV and boat garages, workshops, storage buildings, and hobby rooms with the RHINO system. Do-it-yourselfers can save by erecting the framing themselves with a few friends.

Call one of our dedicated steel-framing specialists today. We specialize in making your purchase to completion as seamless as possible.