Eco-Friendly Building in the Cornhuskers State Starts with Steel

Pre-engineered metal buildings in Nebraska stand up to the unique challenges facing cornhuskers. 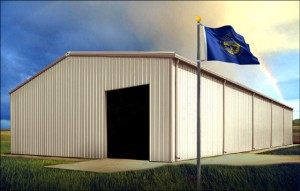 Nebraskans boast a proud heritage of caring for the environment. Looking out over endless prairies, early settlers in Nebraska longed for the tree-covered valleys and mountains they had left behind.

Detroit residents Julius Sterling Morton and his wife Caroline (Carrie) moved to the Nebraska territory on their wedding day in 1854. Staunch nature lovers, Morton and his wife quickly planted trees and shrubbery around their home, experimenting with different types to find the trees that grew best in the Nebraskan soil. The Mortons vigorously encouraged others to follow their example. 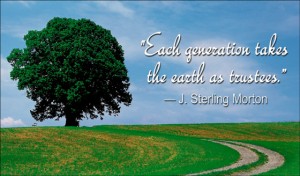 A journalist with printer’s ink in his blood (both his uncle and grandfather with publishers), Morton soon became editor of the Nebraska News. Through the newspaper, he continued to promote taming the prairieland by planting trees for soil conservation, fruit, shade, windbreaks, wildlife, and enjoyment.

Morton proposed instituting a united effort for tree planting, to be dubbed Arbor Day. He considered this a “battle against the treeless prairies.”

“There is no aristocracy in trees,” said Morton in the Omaha Daily Record in 1872. “They are not haughty. They will thrive near the humblest cabin on our fertile prairies, just as well and become just as refreshing to the eye and as fruitful as they will in the shadow of a king’s palace.” 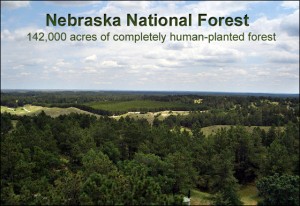 The first Arbor Day, celebrated on April 10, 1872, saw over one million trees planted across Nebraska. The celebration was so popular that Arbor Day became an annual even in Nebraska in 1874.

The Arbor Day idea eventually spread to other states across the U.S., and was even adopted by several foreign countries. Billions of trees have been planted around the world as a result of Arbor Day celebrations.

In 1894, President Grover Cleveland chose Morton for his cabinet, appointing him U.S. Secretary of Agriculture. Morton also served as president of the American Forestry Association.

The Nebraska National Forest itself is the result of human cultivation across previously desolate plains. Covering almost 142,000 acres, it remains the largest human-planted forest in the U.S.

Today the Mortons’ home, Arbor Lodge and Arboretum, is a Nebraska State Park. The grounds include 270 varieties of shrubs and trees imported by the Mortons’ from all over the world.

The Morton’s son Joy, founder of the Morton Salt Company, continued in his parent footsteps as a conservationist. Joy Morton’s estate, the Morton Arboretum in Illinois, covers 1,700 acres. Created as a living history museum, the arboretum includes over 4,000 types of trees, shrubs, and other wood-like plants.

Today the Cornhusker State continues the environmental legacy of the Morton family by developing energy-efficient technologies.

Nebraska ranks fourth in the U.S. as a wind energy resource. Over 500 wind turbines dot the state, generating 300 billion kilowatt-hours of energy.

Nebraska steel buildings save trees by replacing ordinary wood framing. But that is just the beginning of the environmental advantages of constructing pre-engineered steel buildings in Nebraska.

A premiere steel building company, RHINO steel framing meets or exceeds all loads and codes for which the building is designed for the lifetime of the structure— guaranteed.