Part one of this series on construction loads covered the basics of dead loads and live loads. Now let’s look at the additional loads old Mother Nature inflicts on structures.

Planning for nature’s violent vicissitudes is tricky. No one knows exactly the strength hurricane-force winds will blow. Who can guess how much snow can accumulate during back-to-back snowstorms? And multiple variables determine the damage inflicted by seismic events. 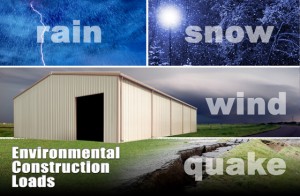 Snow, wind, and earthquakes produce transient stresses on a building, sweeping in and out quickly. Consequently, seismic, snow, and earthquake loads are live loads.

As snow gathers on a roof, it adds weight on the structure, increasing the vertical load.

Snow accumulation also affects weight and therefore the downward force on a building. If the roof has thirty inches of snow on it from last week’s blizzard and another four inches falls, it might be enough to damage a building not engineered for that much strain. 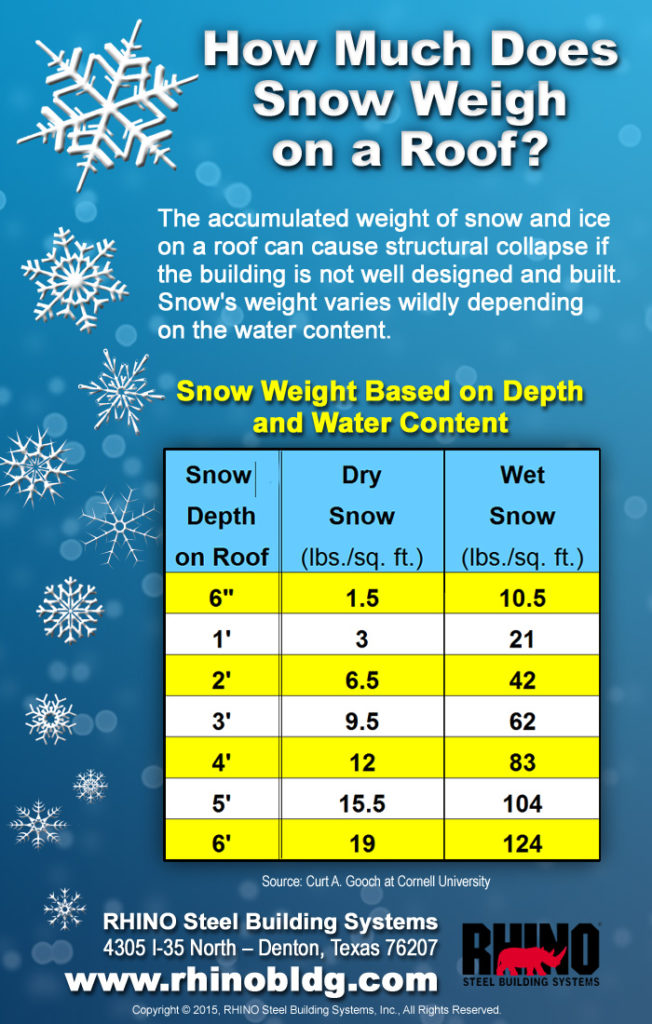 Uneven distribution of snow by wind— with drifts stacked up around roof valleys or against chimneys— creates additional stress points on a structure.

Another consideration is the horizontal load large snowdrifts place on the sides of a structure.

[NOTE: Structural engineers compute snow load one of two different ways: as ground load or as roof load. In snow country, make sure you know which method your steel building company is quoting. The variances between ground snow load and roof snow load produce dramatically different structures and pricing.]

Ice is particularly stressful because of its density. A one square foot by one-inch thick patch of snow may weigh four to twelve ounces. A square foot of ice one inch thick weighs almost five pounds! For a 2,400 square-foot building roof, one-inch-thick ice adds almost 12,000 pounds of extra weight on the structure.

Strong winds inflict a certain amount of lift, or lateral load, on a structure.

Lift only becomes a factor if the structure has deep eave extensions— or if the building envelope is breached. For example, if an overhead door collapses or a large window blows out during a hurricane, the winds enter the building, creating a lifting pressure against the roof. (That is why it is important to purchase certified wind-rated doors in coastal areas prone to tropical storms.)

The majority of wind force is a horizontal load, thrusting against the sides of a building.

The velocity of the wind and the size of the structure determine the wind’s force. Low-rise structures tend to be less affected by hurricane-force winds than high-rise buildings, because there is simply a larger surface for the wind to push on.

Structural engineers must also consider ground vibration as a factor. They look at the foundation, soil type, building system, the duration, and the power of an earthquake possible in that specific area.

No other structural material matches the strength-to-weight ratio of steel. Neither rain, nor snow, nor wind, nor earthquakes deter RHINO steel buildings from conforming to all local building codes. Regardless of your location in North America, RHINO’s pre-engineered metal buildings will meet— or exceed— every current building load requirement in your area— guaranteed.

RHINO has never been refused a building permit anywhere. Our steel buildings will meet all construction loads for the extreme snow codes in Canada, the hurricane-force wind codes of Florida, the stringent seismic loads in California— and everything in between.

Our experienced metal building specialists can answer your questions, offer sound construction load advice, and provide you with a free quote on your next building project.

If changing weather patterns or seismic anomalies in your area have you concerned that current building codes are insufficient, we will happily give you quotes for structures at greater snow, wind, or seismic loads.