To appreciate the work of structural engineers, you need some rudimentary knowledge of construction loads. 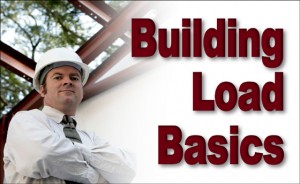 Engineers incorporate “static” and “dynamic” load principles to design the strongest possible structure with the least amount of wasted material.

Static loads, also known as “dead loads,” are the permanent loads of the structure.

Anything hung from or attached to the structural framing is a “collateral” dead load. Collateral loads cover objects like roof-mounted air-conditioning/heating units and HVAV ducting, water fire sprinkler systems, lighting fixtures, material handling systems, or interior manufacturing cranes. The soundness of the structure depends on the structural engineer knowing in advance all the auxiliary materials to be used in the building.

Dead loads include everything likely to remain over the lifetime of the structure.

You might expect concrete foundations to govern the maximum weight of the structure. Not so. Pre-engineered metal buildings are designed first, and then the concrete engineer creates the proper sized foundation to support the dead loads of the building.

Dynamic loads, better known as “live loads,” are the transient or temporary additional loads imposing additional force on a structure and its foundation.

The weight of a worker walking across a steel building roof is a live load. Any objects moved in and out the structure are live loads, including people (designated as “occupancy”), plants, furniture, and so forth. For example, in a garage, cars, trucks, boats, and RVs constitute live loads.

However, the mezzanine system must be engineered to sufficient carry the live loads of materials and people using them. The concrete engineers design the foundation based on the mezzanine’s placement and calculated loads.

Basic pre-engineered steel buildings take the guesswork out of construction loads— and eliminate the need for hiring an expensive structural engineer for a building project. Pre-engineering efficiently crafts a sound, solid steel structure.

This process results in a maximum strength structure at a minimum cost.

For more information about steel framing loads or ordering a pre-engineered RHINO steel building, please call 940.383.9566. We can answer all your questions and provide you with a free estimate for any building needs.

See part two of this series for information on the different environmental construction loads taken into inconsideration, such as seismic, snow, and wind loads.