Mother Nature Having One Hissy Fit After Another This Year

We have just passed mid-October, and 2017 weather disasters continue to unfold.  Blizzards, droughts, floods, freezes, hail, hurricanes, tornadoes, wildfires— there seems to be no end to the calamitous climate-driven catastrophes this year across the U.S. 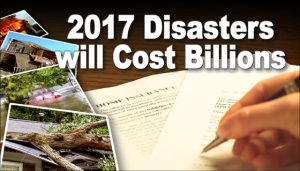 Billions of Losses from Weather Disasters

National Centers for Environmental Information (NCEI) tracks weather-related events annually, both in the U.S. and globally.  By compiling the data year after year, the NCEI documents climate trends and weather extremes.

Certainly, there were many more climate-related disasters across the U.S. in the less-than-billion dollar range, as well.

Will the Trend Continue?

The NCEI operates as part of the National Oceanic and Atmospheric Administration (NOAA).  NOAA expects this inclination of costly disasters to continue in the future based on three factors:

What can we do to reduce our risk of property damages from weather disasters?

We can build smarter, build stronger, and build safer.

No type of structure can claim complete immunity to damage from catastrophic climate events.  However, one building method outshines all others in standing up to Mother Nature at her worst: commercial-grade pre-engineered steel buildings.

Our next blog details the many ways RHINO steel buildings resist damage from high winds, fire, heavy snows and rains, earthquakes, and the passage of time.