The national media recently covered the paths of destruction of Hurricanes Harvey, Irma, Maria, and Nate practically minute by minute, all but ignoring the rash of fierce wildfires flashing across the Northwest. 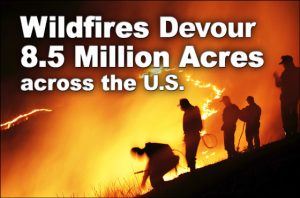 Admittedly, the hurricanes were huge stories with incredible impact on the U.S.  However, the catastrophic story unfolding in California, Idaho, Montana, Oregon, and Washington, barely made a blip on the national news radar— until this week, when deadly fires erupted in Northern California’s wine country.

As of this morning, officials report 31 people have died in the California wildfires.  Thousands of people have been evacuated, some with only minutes to spare.   Officials warn others to pack a “go-bag” and be ready to leave at a moment’s notice, as the deadly fires continue to spread.  Many people returning to secured areas find everything they own reduced to ashes. 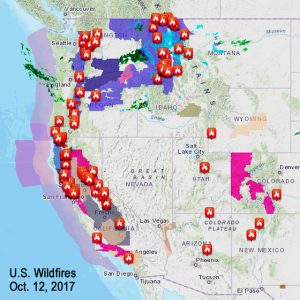 As of today, the National Interagency Fire Center reports 50,996 wildfires so far in 2017.  Over 6,500 firefighters continue battling the blazes across California.

Unfortunately, wildfires do not stop at borders, either.  The Canadian province of British Columbia (B.C.) is experiencing its worst fire season in recorded history.  In August, nineteen wildfires merged into one gigantic holocaust covering 1,200,000 acres.  Officials declared the entire region under a state of emergency in September.

What is Causing Recent Conflagrations?

However, rains dried up quickly in the following months.  Record-breaking triple-digit temperatures and lack of rain brought on drought-like conditions.  With a dearth of moisture and an oversupply of fuel, wildfires spread rapidly in hot, dry summers.

Firefighters dispatched to aid hurricane victims in Texas and Florida, leaving those battling wildfires without their normal back-up firefighters.

Exacerbating the problem, climates changes in the past 40 years have extended the wildfire season an additional two-and-one-half months.

Where There Is Fire, There Is Smoke 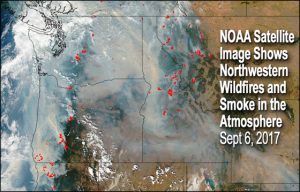 Early last month, ash fell like snow in Seattle, driven by the wildfires.

NASA (National Atmospheric and Space Administration) reports wildfires are more injurious to human health than we imagine.  A new study, released in May 2017 by Georgia Tech researchers, shows the particulate pollution unleashed into the atmosphere by wildfires to be three times what was previously believed.

NASA satellite shots traced smoke from the Canadian wildfires as it entered the U.S. via the Jetstream.  Smoke from the Pacific Northwest wildfires in the U.S. crossed America, sailed over the Atlantic, and entered Paris, France five days later!

An undetermined number wildfires are deliberate ignition by arsonists.

While no structure is 100% fireproof, it just makes sense to construct buildings as fire-resistant as possible.

If a fire begins in the contents of a steel building, rest assured the steel framing adds no fuel to the fire like wood framing.  Moreover, rigid-iron metal buildings stand up under intense heat far longer than lumber-framed or light-gauge steel framed structures.

In fact, our steel buildings are so fire-resistant that most carriers offer reduced insurance rates to RHINO steel building owners.

And there are so many other advantages with a RHINO metal building!

Find out more about the wonders of RHINO Steel Building Systems.  Call us today at 940.383.9566.  Speak to a RHINO metal building specialist about your upcoming construction project.  Ask for a free brochure and a free quote.  Learn more about The RHINO Difference.  You will be glad you did!