Combating the Cost of Calamities with Steel Buildings

In the wake of the devastating natural disasters recently inflicted on the U.S., building stronger structures like steel buildings is vital. Choosing to build structures to stand up to Mother Nature at her worst just makes sense.

Counting the Cost of Catastrophic Events

The escalating cost of natural disasters in the U.S. boggles the mind. 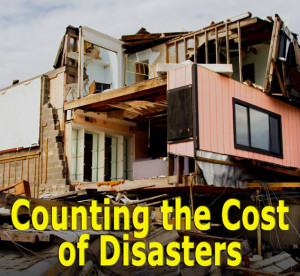 According to National Oceanic and Atmospheric Administration (NOAA), since 1980 the U.S. has suffered 170 weather related disasters where damages topped $1 billion. Total cost of the events is more than $1 trillion.

The U.S. government now spends an estimated $50 billion annually on disaster relief. That reflects a significant jump from the average $10 billion per year spent just a decade ago. It works out to $408 per year for every household in the country.

Large-scale disasters also wreak havoc with insurance costs. Insurance losses for natural disasters in 2013 soared to $86.4 billion in the U.S.

Government and insurance costs reflect only part of the economic impacts of catastrophic disasters. Charitable organizations spend millions more for aid and assistance— money usually garnered from donations across the country.

In 1994, an earthquake in Northridge, California killed an estimated 60 people, injured thousands more, and destroyed 112,000 structures. Measuring 6.7 on the Richter scale, the quake ran up an estimated $42 billion in damages— $61.3 billion adjusted to today’s dollars.

The bolted connections of pre-engineered steel buildings— called moment connections— allow a certain amount of give in earthquakes. Moment connects are far less likely to fail than wood framing or other types of structures.

Mother Nature’s tantrums produce windstorms like derechoes, violent thunderstorms, dangerous lightning, punishing tornadoes, heavy snowfalls, howling hurricanes, and devastating wildfires. No matter where you live, you are vulnerable to at least some of these natural disasters.

WIND-DRIVEN DISASTERS: RHINO metal buildings will meet or exceed every building code at your location— guaranteed. For additional protection, you may choose to increase the loads required. The stronger the design, the less likely your property will suffer from high speed winds in derechoes, hurricanes, blizzards, thunderstorms, or tornadoes.

Much of structural damage inflicted by high winds results from connection failure. In a wood-framed structure, for example, winds create a lifting force on the roof. Nails connections pull out under pressure. Once the roof disconnects, the walls become vulnerable to collapse.

LIGHTNING DISASTERS: As a poor conductor of electricity, wood resists lightning strikes. The lightning lashes out from the framing, striking and igniting nearby objects.

Steel is a perfect conductor of electricity. In a well-grounded metal building, lightning passes through the framing, discharging harmlessly into the ground.

SNOW DISASTERS: RHINO structures meet all local snow load codes. Upon request, your structure can include even higher snow resistance, for additional protection.

FIRE DISASTERS: Wildfires make the news often these days. Recent years of below normal rainfall have amplified wildfire danger. According to the NOAA study, 11 wildfires since 1980 have surpassed $1 billion in damages.

Fire-resistant steel is far less likely to suffer damage in a fire.

Some attribute the rising costs of natural disasters to global warming. Others believe the increase of events is part of a natural pattern of weather cycles.

Whatever the cause in the increased number of these calamities, soaring property values are sure to make future events even more expensive. Building stronger, safer, pre-engineered steel buildings constitutes one of the best defenses from natural disasters.

Learn more about RHINO steel building systems. Call and discuss your building project with one of our friendly, knowledgeable metal building specialists. They will be happy to answer all of your questions and give you a fast, accurate quote for your project.