Why Is There a Christmas Tree on Top of That Steel Building?

The “Topping Out” Ceremony

Have you ever heard of a construction “topping out” ceremony? It’s a time-honored tradition in commercial steel construction to have an official observance celebrating the completion of the building’s framing.

In a construction topping out ceremony when the last steel beam is raised in place at the highest point of the building, a small evergreen tree (known as the construction “Christmas tree”) is attached to the beam. In this country, often an American flag is also put on the opposite end of the beam.

Sometimes in large commercial projects the last beam raised is painted white.  It is then signed by all the members of the erection crew, the building contractor and staff, the architects, and the owners of the building, and other dignitaries.  Speeches are usually made commemorating the event, congratulating all the workers for doing a great job and highlighting the benefits of the new building to the community.

The Origins Of The Construction Topping Out Ceremony 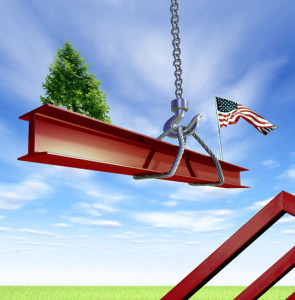 Like many traditions and holidays we celebrate today, the construction topping out ceremony seems to have been passed down from early pagan traditions.

One version credits Viking chieftains with erecting houses called mead halls, which were topped by an evergreen to celebrate completion.  Other stories estimate that as early as 700 A.D. Scandinavians were topping out their structure with a fir tree to signal those nearby that it was time for the celebration to start.  Still other tales attribute construction topping out to American Indians who believed that no structure should be taller than a tree, so Native American Indian construction workers topped any tall building with an evergreen to appease the forest spirits.

The Topping Out Tradition for Today

Whatever the origins of the construction Christmas tree tradition, today it signifies the safe completion of the framing of the structure, and a wish for continued good luck for the future of the building project— and its eventual occupants.

Many times refreshments are served at the construction topping out party as a thank you to the workers. Some ceremonies even include live music and dancing.

Part of the charm of the topping out tradition is that each ceremony is somewhat unique. Sometimes tree boughs are used instead of an evergreen construction Christmas tree. Other ceremonies use only the flag.  Sometimes streamers and confetti and catered lunches are part of the ceremonies.  Topping out parties for large projects can become local media events.

(I’ve heard that in Norway they place a tree on the ridge of a house under construction to indicate it’s time for a party to start.  If they don’t plan to have a topping out party, they put a scarecrow on the roof instead of a tree!)

The addition of the flag to the topping out steel beam is a uniquely American tradition which can be traced back over 100 years to proud and patriotic American ironworkers.

Topping Out the Empire State Building

Construction on the Empire State Building in New York began in 1930.  Not only was the building one of the early examples of steel building construction, it was also one of the first construction projects to have the steel prefabricated off site and then brought to the job site to increase efficiency.

As many as 3,400 workers were on The Empire State Building site at one time.  They averaged an incredible 4.5 floors per week.

When completed, the Empire State Building towered 1,454 feet (including the spire) and encompassed 102 floors.  Originally it contained 64 elevators.

An estimated 57,000 tons of structural steel were fabricated and milled to precise specifications to erect the Empire State Building.  The entire building was completed in less than 18 months.  It took over 7,000,000 man-hours to complete.

The Empire State Building had a topping out party in the fall of 1930, raising an American flag as the last piece of framing was hoisted into place.

For 40 years the steel-framed Empire State Building was the tallest building in the world, until the World Trade Center was completed in 1972.  On June 25, 2012 New Yorkers at Ground Zero watched the topping out ceremony of the new 4 World Trade Center.

Celebrating Your Own Steel Building

Although most often associated with commercial steel skyscrapers, the topping out ceremony is a wonderful celebration for any construction project, including low-rise metal buildings and even residential construction.

We need more traditions that commemorate not only the completion of a project, but that also celebrate the process of building.

While the grand opening festivities at the end of a building’s construction are meant to introduce the structure to the public, the topping out ceremony uniquely honors the accomplishment of the construction crew.

Whether your next RHINO prefabricated metal building is erected by a professional steel framing crew or by yourself, your friends, and family, why not take a couple of hours to celebrate what’s been accomplished?  Why not enjoy the entire steel building process while thanking those who make it possible?

Celebrate the journey to your building’s completion.