What Are Metal Building Purlins?

What Purpose do Purlins Serve on a Steel Building?

Let’s get down to the basics of metal building roof purlins. Purlins are an important component in a pre-engineered steel structural kit.  These structural supports run perpendicular across the rafter beams.

Also known as “sheeting rails,” purlins create the roofing members of the secondary framing of a steel building.

The Purpose of Purlins 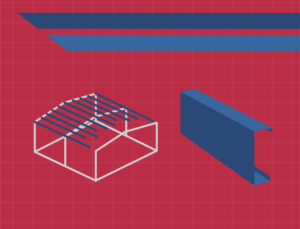 Wood framing employs decking to tie roof trusses together and support the roof.  Decking is heavy and expensive.  It is also time-consuming to install, driving up labor costs.

In general, metal roof purlins come in two varieties: C-purlins and Z-purlins.  These purlin styles get their names from their shapes.  When looking at the ends of the rails, the purlins shapes look like the letter “C” or the letter “Z.”

The eave purlin marks the first purlin at the wall connection.

How RHINO Purlins Are Better

Some steel building companies provide purlin connections that butt flush against each other on the rafter.

However, at RHINO, we design our purlin systems for maximum strength.

The greater the amount of overlap between connecting purlins, the stronger the connection will be.  Consequently, all RHINO purlins overlap by design.  The amount of lapping increases as the load increases.

Call RHINO today at 940.383.9566 to learn more about the cost-effective RHINO Difference of low-rise construction.  Our experts are standing by to take your call now to answer questions about our metal building roof purlins.