The Powerful Quakes of New Madrid

Surprisingly, some of the strongest earthquakes to shake the continental United States did not occur in California, but in what is now Missouri.

Centered in the area around New Madrid, the series of tremblors ranked as high as 7.9 in magnitude.  That’s the top of the “major” earthquake scale.  (“Great” earthquakes begin at an 8.0 magnitude.) 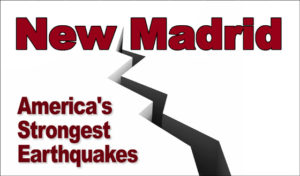 According to U.S. Geological Survey (USGS) calculations, the New Madrid earthquake that struck February 7, 1812, was 1.995 times the strength of the infamous Great San Francisco Earthquake of 1906.

Timeline of the Strongest Earthquakes in New Madrid

In 1803, the U.S. purchased 828,000,000 square miles from France.  This vast territory doubled the size of the fledgling country of America.  That Louisiana Purchase included present day Missouri, which was not admitted to the union as a state until 1821.

Historical eyewitnesses report counting another 27 shocks before daylight that day.  In fact, a second major aftershock of 7.4 magnitude occurred at 8:45 A.M. that same morning.

These earthquakes were so strong, they were felt over one million square miles!

A tiny village called Little Prairie was heavily damaged when the quake liquefied the soil.

The quake severely damaged houses in St. Louis.  Uplift caused by the quake created temporary waterfalls along the Mississippi River.

Unfortunately, a 7.0 magnitude aftershock struck at about 10:40 P.M. the same day.

The Scope of the Earthquakes

Eyewitness accounts from many sources echo the fear and confusion following the New Madrid quakes.  They speak of “tremendous noise,” with the crash of falling trees and the terrified screams of cattle and wildlife.  Several reported sulfurous vapors. 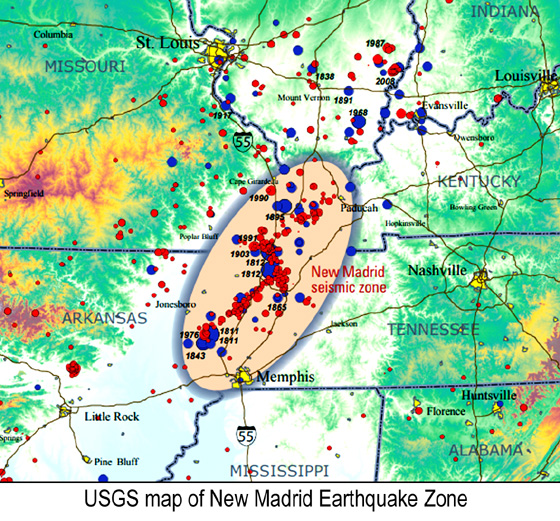 The New Madrid earthquakes rang church bells as far away as Boston and Charleston.  People in Montreal— 1,200 miles away— felt the largest New Madrid quakes.  In fact, President James Madison and First Lady Dolly Madison reported feeling the quakes in the White House!

The quakes destroyed thousands of trees in the virgin forests of the area.

After the February 7, 1812 quake, parts of the agitated Mississippi River appeared to run backwards.  The tremblor clogged many streams with dirt and debris.  This caused the formation of Reelfoot Lake, in what is now Tennessee, drowning the inhabitants of an Indian village.

Whole islands on the Mississippi River disappeared during the largest New Madrid quake.

Geysers surged from the earth, spitting sand water, and mud as high as the tops of tall trees.

The series of earthquakes created numerous sand boils.  A sand boil forms when sand and water shoot to the surface when the strongest earthquakes liquefy the soil.  In fact, these earthquakes fashioned the largest sand boil in the world.  Found in the bootheel of Missouri, this whopping sand boil covers 136 acres!

Other odd phenomena seen during these quakes include earthquake lights and tar balls.  Earthquake lights flash from the ground when a quake puts tremendous pressure on quartz crystals.  Tar balls are nodules formed when petroleum solidifies.

A Whole Lot of Shaking Goin’ On

In the history of the world, no other earthquake outbreak has lasted as long as those of the New Madrid quakes.

From December 1811 through March of 1812, the area experienced over 2,000 earthquakes.  Experts believe that 10,000 tremblors struck the bootheel of Missouri over a six-month period.

Today, the area still quakes with an average of 200 small tremblors each year.

The Future of the New Madrid Seismic Zone

According to the Smithsonian, paleo seismologist Martitia Tuttle studied the New Madrid area thoroughly two decades ago.  She and her team of experts concluded that the New Madrid earthquakes were not a “one time freak event.”  They believe that was just the latest of many major events in this area in the past two thousand years.

Another such series of major quakes in America’s heartland would be disastrous.

Frighteningly, the same report predicted that a major quake would result in widespread catastrophic damage across Alabama, Arkansas, Illinois, Indiana, Kentucky, Mississippi, Missouri, and Tennessee.  Over 12 million people would be in the affected areas.  Moreover, the loss of life might exceed 86,000.  Economic losses could top $300 billion.

RHINO Steel Building Systems create the strongest possible structures.  Our buildings are pre-engineered to meet or exceed all current local building codes— including seismic loads— for the lifetime of the building.  Moreover, if requested, we can design a structure at even greater than your building code minimum requirements.

Find out more about RHINO.  Learn why RHINO structures are the strongest, safest, smartest way to build— wherever you live.