From cotton fields and cornfields, to aerospace and automobile industries, Missouri embraces the best of rural and urban lifestyles. 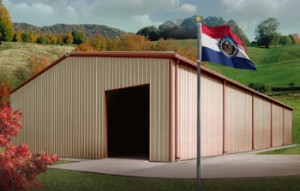 Unfortunately, as a part of the infamous Tornado Alley, Missouri has experienced some of the worst tornado disasters in U.S. history.

Generally, people think of the West coast when they think of earthquakes. Surprisingly, the worst series of earthquakes in American history centered around New Madrid, Missouri in 1811 and 1812.

The U.S. Geological Survey estimates three of the New Madrid quakes would measure from 7.5 to 7.7 on the modern Richter scale. One quake was so strong, it was felt 1,000 miles away, awakening people as far away as New York, Washington, D.C., and Charleston, South Carolina. It reportedly rang church bells in Boston.

The New Madrid quakes caused waves on the Mississippi River so large that boats were capsized or swept inland.

Two hundred years later, a similar earthquake would be far more devastating, as the area is now heavily populated and urbanized.

A RHINO Metal Building in Missouri for Every Purpose

Missourians are famous for their skepticism. RHINO welcomes the scrutiny and questions of those from the ‘Show Me’ state.

We are convinced you will find our Missouri metal buildings to be the perfect structures for all your projects.