After the Storm: Environmental Impacts of Hurricanes

While the immediate effects of major cyclones dominate new stories, the environmental impacts of hurricanes can last for decades. As the media focuses on the human loss of life and property, the ecological devastation of natural habitat tends to get lost in the headlines.

Hurricanes wreak death and property destruction on both people and wildlife. Man and animals can both suffer the ability to feed and house themselves and their families. 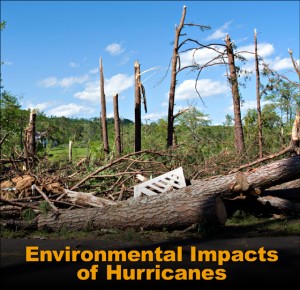 Flowers, fruit, and seeds stripped away by howling winds leave little for surviving birds and animals to eat. Seeds carry far from their original habitat, introducing trees and plant life into new areas, invading other ecosystems.

Forest canopies, bared of their foliage by the merciless winds, leave undergrowth with no protection from sun and heat. Humidity falls. Temperatures rise. The balance of the eco-system shatters. Vegetation that once flourished in the forest floor dies out. Plants once foreign to the area invade. The food source for countless animals, birds, reptiles, and insects changes forever.

Powerful hurricane gales can kill birds outright— or send them hundreds of miles away from their natural habitat. Waterfowl are most at risk in a storm, as their webbed feet do not allow them tight purchase to ride out the storm.

Birds often become trapped in the calm eye of a hurricane, simply following along with the storm until it finally loses power inland.

Migrating birds suffer two ways in a hurricane. They may be caught by a strong tropical storm or hurricane, and then carried hundreds of miles off course. If migrating birds travel over areas already ravaged by severe storms, they can have a rough time finding adequate food to continue their arduous migration journey.

Soil, sand, and sediment liberally mixed into flooding waterways increases turbidity— a cloudiness to the water. Some marine life and plants cannot survive the murky water.

Massive amounts of freshwater mix with saltwater, upsetting the alkaline balance of the water. Animals, birds, fish and water life depend on the delicate balance of salt to fresh water in inland bays and coastal estuaries.

In 1972, Hurricane Agnes’ rains poured fresh water into the normally brackish Chesapeake Bay. The underwater grasses of the bay almost died out completely. Crabs and fish species depending on the grasses suffered.

Fragile coral reefs, which support numerous species, cannot withstand an onslaught of freshwater diluting the salt content of the water.

Fluctuating water balance places great stress on the wildlife survivors of the hurricane.

Waves often break delicate coral reefs. Storm debris and sediment can cover and destroy portions of reefs. Species depended on the reef may die or disappear from the area. 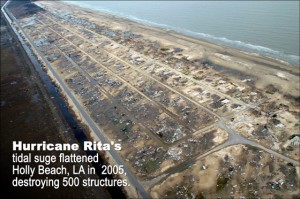 Large sea mammals and reptiles may be swept inland by pounding hurricane-driven waves and storm surges.

Eroded beaches and sand dunes leave the coastal areas even more vulnerable to the next major storm.

Sometimes the peak of storm wind coincides with high tide, magnifying damage. Storm tide, as it is called, floods bays, rivers, and creeks.

The largest storm ever recorded in the Atlantic, Hurricane Sandy stretched over 1,000 miles across. The massive 2012 storm affected every state on the U.S. eastern seaboard, from Florida to Maine.

Sandy slammed into New York and New Jersey in 2012, at high tide. Sewer systems and subways flooded. The storm tide destroyed 375,000 housing units and killed 97 people in the area— mostly from drowning.

Every RHINO metal building contains recycled steel. Steel is the only building material that loses none of its strength when recycled. In fact, steel can be recycled endlessly and still maintain all its inherent strength.

Pre-engineering means RHINO buildings promise faster construction— and little waste. Everything arrives at the jobsite cut, welded, drilled, painted, marked, and ready for assembly. At the end of the structure’s usefulness, all the framing is sold to a metal dealer to be recycled once more.

RHINO designs structures with wind loads of 170 m.p.h. or more. Our buildings will meet or exceed every present-day building code— guaranteed for the LIFETIME of the structure.