Some of these lightning myths are misguided, but harmless. Others are dangerous, even deadly, during a thunderstorm. Don’t accept hearsay about lightning myths without divining the facts: 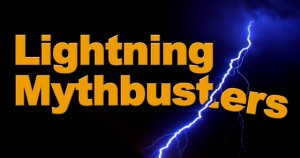 Balderdash. Any location may be struck more than once. Lightning often strikes repeatedly—especially tall, pointed, or isolated objects. Soaring commercial television antenna towers and skyscrapers seem to be favorite targets. For example, lightning struck the Sears Tower in Chicago ten times in one night. Bolts hit the Empire State Building as many as 100 times each year.

No, they do not. Hard-topped automobiles are relatively safe in electrical storms. However, the steel roof and frame protects occupants from lightning, not the tires. If lightning should strike the car, the current follows the metal frame and into the ground. While injuries can occur when lightning strikes a car, you are still safer inside the vehicle than outside in the open. During an electrical storm, be sure not to lean against the car’s doors or other metal parts.

CAUTION: Not all vehicles shield people in thunderstorms. Open vehicles like ATVs, bicycles, and motorcycles provide zero protection from lightning. Avoid unenclosed tractors and construction equipment, too. Stay away from convertibles and fiberglass cars and recreational vehicles, which offer no protection from electrical current.

This too is a myth. Metal objects are no more likely to be hit by lightning than any other object. Lightning hits anything in its path.

Metal structures are, however, less likely to be damaged by lightning.

Metal conducts current easily. Well-grounded steel buildings, for example, transfer the electrical charge harmlessly into the ground when lightning strikes. The electrical resistance of lumber-framed structures makes them much susceptible to damage from a strike.

CAUTION: Although metal does not draw lightning, it does conduct the current when struck. Therefore, stay away from metal fencing, railing, bleachers, and steel pipes, doors, and windows. If taking shelter in a steel building, stand away from walls and support columns.

This myth carries potentially deadly consequences. Lightning may strike 5 miles or more from the rainy portion of an approaching thunderstorm. “Bolts from the blue”— lightning dispersed from the back of a storm after the rain has passed, may strike 15 miles or more from the retreating storm. According to the National Weather Service, “anvil” or “crawler” lightning arcs great distances, sometimes traveling as far as 50 miles from a storm.

MYTH #5: When you see a storm approaching, hurry to finish your game.

That is a terrible plan! Sporting events are prime targets for lightning causalities. As just stated in Myth #4, lightning may travel much farther than most people suspect. Be safe. Stop the game. Go indoors.

MYTH #6: In a storm, seek shelter under the nearest big tree.

Absolutely NOT! Wood is a very poor conductor of electrical charges. When lightning zaps a tree, the sap boils under the intense heat. The resistance of the wood often causes the tree to explode, turning bark, limbs, and splintered wood into deadly projectiles. The tree can topple over or catch fire.

MYTH #7: You may be electrocuted if you touch a lightning victim.

Not true. There is no residual current in the body of someone struck by lightning. The victim may be suffering from cardiac arrest, severe burns, and nerve damage. They need immediate assistance! Call 911. If you are trained, administer CPR.

MYTH #8: Lightning kills everyone it strikes.

Fortunately, this lightning myth is not true. About 90% of lightning victims survive— but often with serious lightning-induced health repercussions.

MYTH #9: There is very little chance you will ever be struck by lightning.

Depends on what you call “little chance,” I suppose. Over your lifetime, you have a 1 in 300 chance of lightning striking you or someone you know. Given the dire consequences for lighting victims, why gamble with your life, regardless of the odds?

MYTH #10: A house is completely safe from lightning.

Common sense should tell you this is not 100% true. Yes, a substantial, completely enclosed building offers the greatest defense from lightning. However, bolts do sometimes strike homes and commercial buildings. For greatest safety in a home or building, go deep into the structure, away from doors and windows.

CAUTION: Do not take shelter under bleachers, picnic pavilions, or any other unenclosed structure in a thunderstorm. Find a structure with a solid roof and four walls.

Avoid using landline phones in a thunderstorm. Contrary to popular belief, surge protectors do not prevent a direct lightning strike. Unplug televisions, stereos, microwaves, and computer equipment until after the storm passes. Stay away from plumbing and wires during a thunderstorm.