How Standby Power Wastes Your Electricity

As you read this, “vampire power” is quietly sucking money from your pocket. So diabolic is this insidious electricity-guzzling ghoul that you never even know you are being robbed.

Here is the real shocker: your appliances and electronic devices are lying to you. They pretend to be turned off. Don’t believe it. Most electrical products continue to draw small amounts of currents even when turned off. 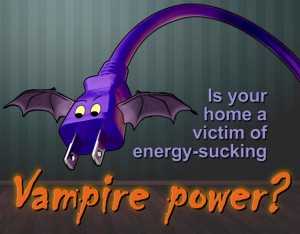 The current used by appliances and electronics while seemingly turned off is called “standby consumption.” The terms “leaking electricity,” “phantom load,” and “vampire power” are used interchangeably with “standby power.”

How do you know which devices to suspect of leaking energy? Look for the clues to identify vampire power fiends in your home:

So How Much Power is Lost in Standby Mode?

Most appliances and devices only consume one to five watts in standby mode. Sounds like no big deal, right? However, studies show American households often have as many as 40 such devices quietly slurping up electricity every day.

Some studies have found vampire power sucking up to 26% of the total household electric bill. Most experts put the average standby consumption at about 10% of the total electricity consumed.

However, with 123 million households in the U.S., 10% of the total energy usage is astronomical.

Americans spend, on average, $1,323 per year for electricity. If usage dropped 10%, one home would save an estimated $132 per year. That’s $16.2 BILLION in electrical savings nationwide.

How to Check for Vampire Power in Your Home

The simplest way to check for leaking energy in your home is turn off everything in your home for just a few minutes. Check your electrical meter. If the dials on the meter are still turning, you are losing current in standby mode.

You can reduce standby power by:

• Use power strips for clusters of devices in one location, like your computer workstation. Turn the power strip off when not in use.

• When buying new appliances or electronic devices, look for products with the Energy Star® label.

• Some electronic devices, such as video game consoles, offer optional settings to reduce the amount of energy consumed in standby mode. Choose the lower setting, where available.

For information on prefabricated metal buildings, call RHINO today at 940.383.9566.