When Wood, Wind, and Weather Created the Perfect Firestorm

The conflagration now known as the Peshtigo Fire claimed more lives than any other blaze in U.S. history. Starting on October 8, 1871, the fire destroyed Peshtigo, Wisconsin and other nearby communities, killing an estimated 1,200 to 2,500 souls. 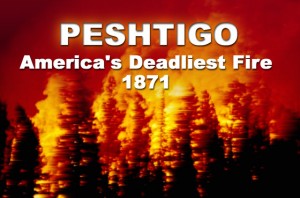 Most people have never even heard about the Peshtigo disaster— in spite of the fact that it happened on the same day as the infamous Great Chicago Fire.

At the same time, a third massive fire destroyed huge portions of Michigan forestland and villages.

A Formula for Disaster

Peshtigo was west of the Green Bay— the “thumb” of Lake Michigan. Virgin forests covered the rich, fertile land. Logging and sawmill businesses abounded in the area.

Although the start of the 1871 fires remains unknown, four anomalies contributed to producing conditions perfect for cataclysmic fires:

In 1871, Peshtigo’s official population was 1,740. Immigrants seeking work at the mills and logging camps, and volunteers recruited to fight the frequent brush fires, swelled Peshtigo’s population to 2,000 that October. 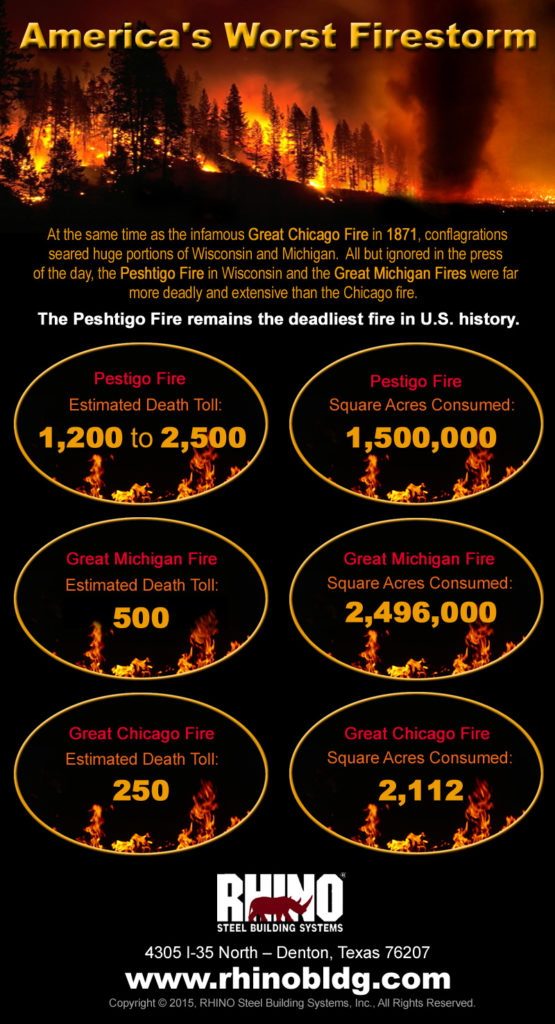 Whatever the source of the fire, when the cold front swept in with its howling winds, the fire quickly grew out of control. It became to a firestorm— a blaze so intense, it generates and sustains its own winds.

Survivors of the fire reported seeing a fire whirl— a tornado of fire— produced by the intensity of the fire. So strong was the inferno, it tossed whole houses and rail cars high into the air.

Hurricane-force winds topping 110 mph fanned the raging flames. In only 90 minutes, the firestorm decimated the town of Peshtigo. The bizarre blaze left survivors baffled and dazed.

• Almost half the population of Peshtigo died— 800 people. Whole families were wiped out.

• Only one structure remained standing, a house still under construction framed with wood so green it would not burn.

• The fire leveled Peshtigo and twelve other communities.

• Many bodies were unidentifiable, reduced to bone.

• All town records burned, making an accurate death toll impossible. Estimates of the Peshtigo Fire’s total fatalities range from 1,200 to 2,500.

• Several people committed suicide when hope of escape was lost.

• Many were killed while crossing a wooden bridge, as it burned and collapsed into the Peshtigo River. The falling bridge crushed those seeking shelter in the frigid waters under the bridge.

• Many drowned or died from hypothermia as they sought refuge in the cold river.

• Temperatures reached 2,000 F. Sand on the streets turned to glass.

• One man, convicted of looting, was sentenced to death— but no rope could be found to hang him.

The fire reduced thousands of homes and business in Michigan to blackened rubble and ash. Hundreds of families were left homeless— and without any wood left for rebuilding.

No building material could survive a raging inferno comparable to these devastating historical fires. However, these stores serve as a cautionary tale to today’s builders. Every precaution should be taken to reduce the risk of damage and loss of life in a fire.

Fire-resistant commercial-grade steel buildings remain the best preventative from the devastation of fire.

RHINO steel buildings create the strongest, most durable, most economical one and two-story steel buildings available today. Call RHINO today at 940.383.9566. Capitalize on the fire-resistant benefits RHINO metal buildings for your next construction project.