Honoring Those Americans Who Gave All for Our Freedom

It is the eve of the Memorial Day Weekend, marking the start of the summer season. People are busy with plans for family picnics, camp-outs, boating, three-day vacations, shopping holiday sales, or just chilling out.

But Memorial Day should mean so much more. 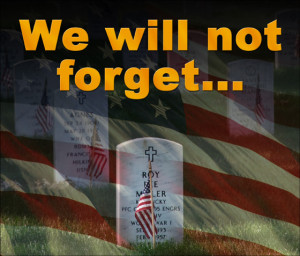 Memorial Day was intended as a day to honor those who died in the service of their country.

The Origins of Memorial Day

Many communities across the U.S. had individual days designated for cleaning up cemeteries and remembering the fallen. However, widespread recognition did not begin until 1865, when the federal government started establishing national cemeteries for fallen Union soldiers.

More than 600,000 soldiers died during the Civil War. Both sides honored their dead in local ceremonies.

General John A. Logan, commander-in-chief of the Union’s veteran organization the Grand Army of the Republic, called for a nationwide observance. On May 5, 1868, Logan issued a proclamation declaring May 30 as “Decoration Day.” On that day, the graves of both Union and Confederate soldiers were decorated with flowers and ribbons at Arlington National Cemetery. Five thousand people participated in the effort to adorn the 20,000 graves.

In 1967, Congress officially changed the name of Decoration Day to Memorial Day.

In 1971, Congress passed the National Holiday Act, which moved the dates of four holidays— Columbus Day, President’s Day, Memorial Day, and Labor Day— to form three-day weekends. Now Memorial Day is observed on the last Monday in May.

Shifting Memorial Day succeeded in turning what was once a day of remembrance and appreciation into an excuse for a three-day weekend blowout.

Thousands still volunteer to place flowers and flags on the graves of soldiers and sailors every Memorial Day.

American flags fly at half-mast from sunrise to noon, acknowledging the sacrifices of the fallen.

In 2000, Congress passed a Remembrance Resolution, designating 3:00 PM local time for Americans to pause, reflect, and remember in a moment of silence or while listening to “Taps.”

We Will Not Forget…

Since the Revolutionary War, over 1,000,000 men and women have paid the ultimate sacrifice for this country.

There is nothing wrong in enjoying a three-day weekend, however you choose to celebrate. But let us take some time to appreciate those who died, preserving our freedom to enjoy this time with friends and family. And may we also remember and appreciate the families of the fallen, who also sacrificed for our freedom.

Let’s also take a moment to honor those continuing the fight, serving America across the globe today. Take time to remember the original meaning of the day and to lift your heart in gratitude to those who bought your freedom with their blood.