New Tariffs on Steel to Raise Cost of Metal Buildings

Order Now to Beat the Increase! 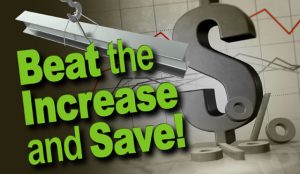 In anticipation of new U.S. government tariffs on steel imports, our suppliers recently issued notices of impending steel price increases of 11% to 13% for all orders placed after April 6, 2018.

Unfortunately, this is just the first of several expected steel price hikes over the coming months.

What’s Behind the Rising Prices?

Global steel prices are rising.  At the same time, the U.S. imposed tariffs on countries flooding the American market with cheap metals. In addition, a robust U.S. economy and a construction boon are forcing steel demand up.

Foreign-made steel accounted for over 25% of America’s steel supply in 2017.

Earlier this month, President Trump announced a hefty 25% tariff on imported steel, plus an additional 10% on aluminum imports.  He signed the new tariffs into law on March 8.  From March 23, 2018 onward, the new tariffs will apply to all imported steel— with the exception of steel coming from Australia, Canada, and Mexico.

Trump is empowered, based on “national security,” to levy these tariffs, according to Section 232 of the Trade Commission Act of 1962.  The argument stems from the belief that reduced U.S. production of metals lessens the U.S. military’s ability to obtain needed fighter jets, armored vehicles, etc.

Over the next few months, steel prices will rise— possibly dramatically.  However, analysts hope that the long-term results will be increased steel production here at home, accelerating growth.

Those positioned to place orders NOW will beat the increase on steel building prices and save money.  Orders finalized and placed by the April 6, 2018 deadline will lock-in the price… as long as the customer does not delay shipment of the building kit.

Call RHINO immediately to discuss your upcoming building projects and beat the up-tick in steel building prices.  Our number is 940.383.9566.