In 1893, the gates opened on the World Columbian Exposition in Chicago, unveiling numerous iron and steel built wonders, including a steel-hulled excursion liner christened the SS Christopher Columbus.

Planning for the World Columbian Exposition, also known as the Chicago World’s Fair, began in the late 1880s. New York, Chicago, St. Louis, and Washington D.C. all vied for the privilege of hosting the Exposition. The United States Congress awarded Chicago with the project in 1890. 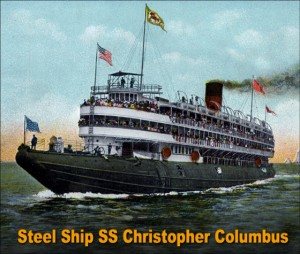 Designed as a celebration of the 400th anniversary of Christopher Columbus’s discovery of America, the World Columbian Fair should have opened in 1892. However, the inevitable construction delays involved in a project of such massive proportions pushed the opening to May 1, 1893.

Although initially designed to carry greater cargo loads across the Great Lakes, McDougall believed whaleback vessels would also serve well as passenger ships. He proposed building one to ferry guests to the Chicago World’s Fair.

McDougall’s American Steel Barge Company constructed the SS Christopher Columbus in 1892 and early 1893. The ship was christened on May 13, 1893.

At 362’feet in length, the SS Christopher Columbus was the longest whaleback ship ever constructed. It was also the only whaleback passenger liner ever built.

Four thousand passengers traveled in luxurious comfort on each round-trip excursion of the Columbus. A crew of 170 cared for the travelers and ship operations.

After the Fair Was Over

After the Fair, the Columbus started making pleasure trips from Chicago, IL to Milwaukee, WI. Advertisements promised “170 miles o’ smiles” for $1.50 per round trip ticket on the “big steel ship Christopher Columbus.”

One of the first ships to boast an on-board radio, the Columbus was able to summon help for the 200 passengers of the disabled City of Racine liner on Lake Michigan in 1909.

During her 40-year career, the Columbus carried more passengers than any other vessel on the Great Lakes.

Need more information? Speak to a friendly and knowledgeable RHINO metal building consultant today about any low-rise building project. Call us at 940.383.9566.