Metal Buildings in Arizona: A Grand Choice for the ‘Grand Canyon State’

Arizona is a land of grandeur. It is a state of extreme contrasts— varied, breathtakingly beautiful— and often wildly unpredictable.

Structures in Arizona must be strong enough to withstand wide-ranging climates across the state.  Some of the steel buildings in Arizona provided by RHINO Steel include: 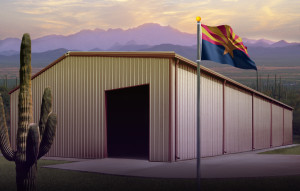 Arizona is known for its warm, dry climate. Nevertheless, Flagstaff, Arizona actually received more snow in the winter of 2009-2010 than did Anchorage, Alaska— 219”.

Designed to meet or exceed all building codes— including freak snowstorms— all RHINO metal buildings stand up to all types of weather better than traditional building methods.

Annual rainfall totals across Arizona are erratic. Yuma averages only 3.3 inches of rain per year, while the mountain regions in the eastern part of the state may receive ten times that amount.

Temperature extremes across Arizona range from a whopping 128 degrees Fahrenheit at Lake Havasu City in 1994, to a numbing -40 degrees at Hawley Lake in 1971.

While not generally known as an earthquake-prone area, Arizona experienced several notable seismic events over the years.

In September 1910, a series of 52 violent earthquakes drove a construction crew near Flagstaff from their camp, as boulders rolled down the mountains. Indians fled the region when a particularly strong quake hit the San Francisco Mountains. In January 1935, a tremor scarred the landscape with a 50-mile long crack near the San Francisco Range.

A study by Arizona State University found almost 1,000 earthquakes rattled the state from 2006-2009.

RHINO Metal Buildings for Every Use in Arizona

Exterior steel panels and trim are available in a choice of attractive colors. However, steel building facades may also be included with materials like stucco, brick, stone, glass, wood, or tilt-up concrete for a more traditional appearance.