From Red-Iron Hangars to the Wild Blue Yonder

Steel hangars are almost as old as manned flight itself. From the early days of flight, protecting the sometimes fragile aircraft from harm was mandatory. 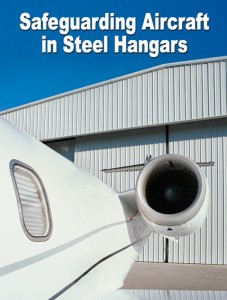 We often forget that the earliest successful manned flights were not airplanes, but gas balloons.

The first manned balloon flight in America was in 1793, when the Frenchman Jean-Pierre Blanchard flew from Philadelphia to Deptford, NJ. Surprisingly, the first silk parachute jump was also made from a hot air balloon in 1797. During the Civil War, hot air balloons were used for reconnaissance.

However, the volatile hydrogen and helium-filled balloons and dirigibles made flight very dangerous.

With the advent fixed wing aircraft, manned flight became not only possible, but commonplace.

The Evolution of Hangars

Early attempts at vertical flying aircraft were gyrating, shuddering contraptions that seem laughable now— yet each failed attempt was actually another step forward.

You cannot figure out what works until you eliminate what does not work.

So it was for aviation pioneers Orville and Wilbur Wright. Their first attempt at a hangar was a wooden shed they constructed in 1902. The Wrights built the hangar to house and repair their experimental glider aircraft at Kill Devil Hills, NC. The structure lasted only a few months it became being badly damaged by storms.

As man extended his horizons with flight, he also expanded his need for wider, stronger, safer hangars for his flying machines.

Engineers quickly switched to steel as the framing material of choice for hangars.

Steel is stronger than wood. It spans father without load-bearing supports. That’s why steel is the material of choice for bridges as well as barns, manufacturing facilities, recreational structures, warehouses, and aircraft hangars.

Some people consider hangars to be mere garages for aircraft. However, hangars are actually engineering works of art.

The size range of hangars is as vast as the aircraft themselves. Modern hangars are built specifically to house and protect small fixed wing planes, helicopters, private jets, jumbo jets, military cargo planes, or even blimps.

Today hangars fall into five basic size classifications, based on the structures width:

The Advantages of Steel Hangars and Buildings

The advantages of pre-engineered steel structures make them the logical choice for aircraft hangars— and all other commercial and industrial structures.

Any aircraft is a sizable investment. It makes sense to choose the strongest shelter possible for the security of such a valuable asset.

RHINO Steel Building Systems provides premium metal structures and first-class customer service for aircraft hangars and other industrial and commercial structures. Our exceptional building system sets us apart from the common herd of metal building. We call these value-added benefits “The RHINO Difference.”

Two things confirm our customers appreciate The RHINO Difference: our high repeat and referral rate and our A+ rating with the Better Business Bureau.

All RHINO steel-framed structures meet, or even exceed, all current the local building codes—guaranteed— for the lifetime of the structure.

RHINO steel aircraft hangar buildings are not only the smart building choice, they are also the environmentally responsible building choice, since steel is the most recycled material in the world.

Your aircraft deserves the best protection available, so experience The Rhino Difference for yourself. Build your next aviation shelter, hangar, or other metal building project with a RHINO-tough steel building system.

For more details about building RHINO steel hangars or other building needs, speak to a metal building specialist today. Call RHINO at 940.383.9566.