The Health Problems Caused by Sizzling Summer Heat in the Cities 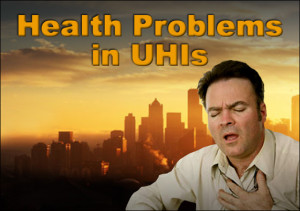 Exhausted, over-heated people seek relief by pushing air conditioning to the limit in business and homes. Power plants struggle to keep up with demand, resulting in the release of more greenhouse gas emissions into the atmosphere. Carbon dioxide flourishes, adding its noxious fumes to the toxic mix. Ground-level ozone forms as volatile organic chemicals (VOCs) react to sunlight and heat. Pollution increases.

Those with respiratory problems are vulnerable to the poor air quality associated with UHIs— especially the very young and the very old. Some evidence suggests the UHI effect increases the pollen count and extends the pollen season, prolonging the suffering of those with allergies and asthma.

According to the CDC, 25 million Americans now suffer from asthma— and that number is increasing. Like asthma, chronic obstructive pulmonary disease (COPD) affects breathing, which is even more difficult during oppressive heat. Over 10 million people in the U.S. have chronic bronchitis.

The next part of this series will cover some the environmental problems UHIs cause.

One of the best ways to mitigate the effects of UHIs is to build energy-efficient, environmentally friendly structures in the first place. RHINO Steel Building Systems create structures that offer urban heat island solutions for people, the planet, and pocketbooks.