What Causes City Temperatures to Soar in Summer?

In part 1 of this series, we covered the basic definition of an urban heat island (UHI). We also revealed twenty U.S. cities which have been 22°F to 28°F warmer than nearby rural areas.

But why are summers in the city so much hotter than surrounding rural locations? 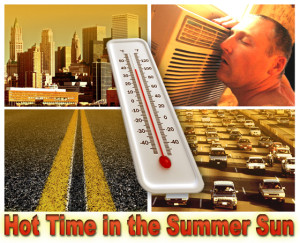 DENSITY: Cities are crowded with buildings, streets, highways, and people.

Over 255 million Americans now live in cities. In some urban areas, like Manhattan Island, the daytime population almost doubles as people commute to work in the city.

Downtown areas run out of space and start building up, creating skyscrapers. Multi-level buildings require multi-level parking garages. With so many surfaces to heat up and hold temperatures, it is no wonder summer temperatures climb.

PAVEMENT: As the number of people traveling within a city increases, so does the need for more roads, highways, and parking.

Asphalt and concrete hold tremendous heat. The Environmental Protection Agency (EPA) estimates pavement covers 30% to 45% of urban areas. According to the EPA, roadway materials can reach temperatures of 120°F to 150°F during the summer. The daytime heat tends to stay trapped in these materials, cooling very, very slowly at night.

EMISSIONS: All the cars, trucks, motorcycles, trains, and buses traveling to and through the cities add to UHI problems. The Database of Road Transportation Emissions estimates urban areas are responsible for 63% of the total annual emissions.

Buildings account for about 35% of all greenhouse gas emissions in America. According to Climate Central, rising greenhouse gasses will drive summer temperatures even higher in the coming years.

Trees not only supply cooling shade, but also absorb carbon dioxide and other pollutants from the air, releasing clean fresh air back into the atmosphere. Trees actually reduce surrounding air temperatures by as much as 10°F and surface temperatures by 20°F or more.

As the song says, we are “paving paradise to put up a parking lot.” 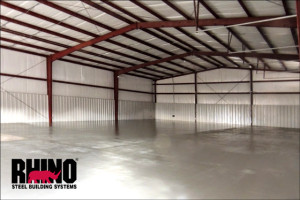 Want to know more about beating urban heat with steel buildings? Please call RHINO today at 940.383.9566. Get a free estimate on the building of your choice— and learn more about our green, energy-saving products.