Why Summer in the City Is Becoming Unbearable

In 1966, the band Lovin’ Spoonful complained about the urban heat island phenomena in their blockbuster hit “Summer in the City.”

Today, summer in an urban heat island is even worse. 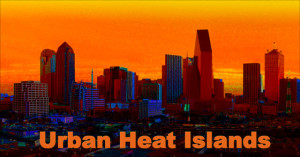 Urban heat islands are nothing new.

Since the early 1800s, those living in large, heavy populated cities have known summer in the city is much hotter than in the countryside. In the 1800s, wealthy Europeans often fled their capitals every summer, preferring to reside in cooler coastal regions over the summer months. (Remember, those poor blokes had no air conditioning or even electric fans, and the clothing styles of the day had to have been beyond uncomfortable.) The poor had to stay in the overcrowded cities and simple endure the summer.

So What Is an “Urban Heat Island”?

An urban heat island (UHI) is any metropolitan area which is substantially warmer than the surrounding rural areas. Densely populated and densely built, these cities create heat greater than normal surface temperatures.

Extra heat accumulated in an UHI during a summer day does not dissipate well at night, as it does in rural areas. In fact, the difference between city temperatures and cooler rural temperatures is even greater at night than in the day!

Dark rooftops, tall buildings, dark asphalt, lack of trees and plants, and heavy traffic all contribute to the UHI problem.

Dark surfaces absorb heat— and hold it. Tall buildings block any surface winds that would ordinarily help cool the area. The lack of green spaces eliminates the cooling effects trees, plants, and grass normally provide. With little wind to dissipate built up vehicle exhaust, and the lack of vegetation to convert carbon dioxide to oxygen, UHI air becomes polluted, stagnant, and just plain hot every summer.

20 Most Extreme Urban Heat Islands in the U.S.

Listed below are the twenty cities with the highest recorded urban/rural temperature difference, based on this report:

All 60 cities in the urban heat island report experienced urban/rural heat differences of 12°F or greater. An astounding 48.3% of these 60 UHI cities sweated through temperatures that were at least 20°F hotter than nearby rural temperatures!

The Lovin’ Spoonful is right: it really is a pity.

Call RHINO at 940.383.9566 now for more details about ordering these cool energy-saving products with your next steel building project.