Why “The First State” Should Choose Metal Buildings

The idea of pre-engineered steel buildings in Delaware is certainly not new. Prefab metal buildings abound in the state. 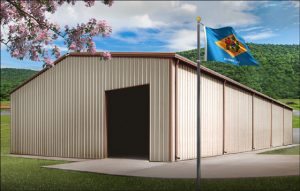 As the first state to ratify the U.S. Constitution in 1787, Delaware gained the reputation of being the first to embrace progress, including steel. At one time, the iron and steel industry had a strong presence in Delaware.

Wilmington became the first center of iron works in Delaware, producing both iron ships and steel railway cars. The first iron steamship launched from Wilmington. By the arrival of the Civil War, Delaware’s Hollings and Hollingsworth had become the most prolific iron shipbuilder in the country.

Delaware even produced all the steel for the Brooklyn Bridge.

It is no wonder that builders in Delaware feel so confident building with steel.

Advantages of Steel Buildings in Delaware

HUMIDITY: The Atlantic Ocean creates a humid climate for Delaware. Consequently, leaks are often troublesome and may lead to ugly, irritating mold in wood-framed structures.

WIND and SNOW: RHINO steel buildings in Delaware meet or exceed all current local building codes— including wind and snow— for the lifetime of the structure, guaranteed.

LIGHTNING and FIRES: Wood framing not only supplies a place for a fire to ignite, it also provides fuel for a building fire.

Steel does not provide an ignition point for fire, nor does it supply fuel for a structural fire started elsewhere.

When struck by lightning, wood framing resists the current, bursting into flames. However, lightning current passes harmlessly through the steel and into the ground of a well-grounded steel building.

EARTHQUAKES and TERMITES: Fortunately, most earthquakes in Delaware have been minor to date. Nevertheless, concerns by FEMA and USGS raised Delaware’s seismic risk level from “low” to “moderate” in 1997.

And wood-framed buildings offer an open invitation to Delaware’s subterranean termites. But no termite can make a meal of steel!

Call RHINO Before You Build

From New Castle to Newark, Georgetown to Dover and everywhere in between, the best deal for steel buildings in Delaware is RHINO.

RHINO ships easy-to-assemble prefabricated steel building kits from multiple factories all across the U.S., including the Northeast.

Call us now at 940.383.9566 for construction tips, a free estimate, and further information on our Delaware sheds, barns, and industrial buildings.