Technology has forever altered every facet of the American experience, but few areas have changed as radically as farming.  Today’s agribusiness operations farm on a much grander scale than even twenty years ago.  Most of the farms are larger, the equipment is huge, and the yield is greater than ever before.  The barns, hay shed, shelters, and other farm buildings must meet the needs of 21st century farmers.  Prefab farm buildings and metal barns like those from RHINO Steel Building Systems meet the challenge. 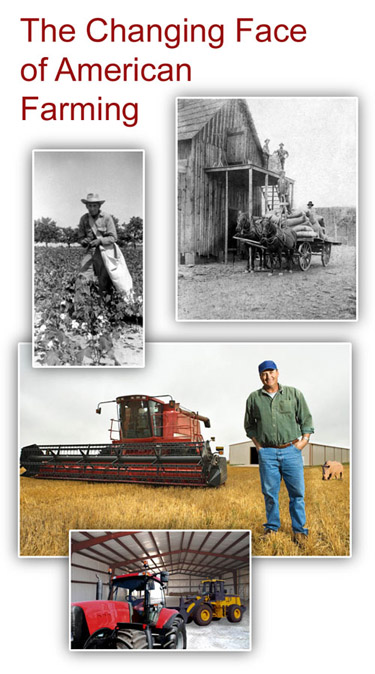 Much of farming today is a large-scale agribusiness, rather than what we think of as a typical “family farm.”  But the giant mega-farms aren’t as numerous as most people think.

Ninety percent of the over two million farms in the U.S. are still owned and operated by families or individuals, many now operating as corporations to take advantage of tax and legal benefits.

A Short History of Farming in America

The early settlers in America farmed pretty much the same way they had in ancient Roman times.  Plows were often a stick with a wooden or metal point attached with rawhide, fashioned by the local blacksmith. They worked— after a fashion— if the horse or ox was strong and the ground soft.  However, three men and several horses or oxen were needed to cut a furrow in hard ground.  Sowing, weeding, and harvesting was all done by hand.  Grain had to be cut with a sickle.

Finally, in 1797, Charles Newbold invented the first cast iron-type plow.  Oddly enough, few farmers would even try the new plow.  They were convinced the new-fangled contraption encouraged weed growth and “poisoned” the soil.

In 1814 Jethro Wood patented a cast iron plow fashioned in three parts.  That way, if one section broke, just the damaged part could be replaced.  Farmers began to overcome their prejudices and try the new plows.

The First Real Improvement in Plows was Steel

In 1834 John Lane patented a plow that was brittle at the surface, but backed by softer metal which was much less fragile.  This greatly reduced breakage.

That same year James Oliver patented a “chilled” plow.  The front of the cast iron plow was cooled quicker than the back, creating a hard, glassy surface with a body of very tough iron.

The first plows able to cut through the tough American prairie ground, these new inventions were called “grasshopper” plows.

In the 1840s farmers began cultivating with two or more plows fastened together to work in tandem with one driver.  During this same time a sulky plow was introduced which allowed farmers to ride rather than walk.

The Invention of the Tractor

The biggest change in farming began when oxen and horses were replaced by traction engine machines.  Although steam engine tractors were tried as early as 1868, it would be fifty years or more before tractors became truly accepted by American agriculturalists.

In 1905 the first company to build tractors exclusively was founded.  By 1921 farm tractors were pulling more plows and doing the work better.  Fifty horsepower engines could pull sixteen plows, while doing the plowing, harrowing, and planting all at the same time.

For the first time a single farmer could work 50 acres or more in a single day.

What a Difference a Couple of Centuries Make!

In 1790 the total population of the U.S. was 3.9 million and farmers were 90% of the labor force.  With over 285 million people living in the U.S. presently, only 1% of the population is farming by occupation.

Mechanization, improvements in equipment and crop varieties, chemical fertilizers, and pesticides have all allowed today’s farms to greatly improve effectiveness and productivity.

In 1890, one farm worker could handle on average of 27.5 acres of crops.  One hundred years later, one farmer worked about 740 acres.

In order to stay productive on such a large scale, some farmers are sometimes using more equipment— and larger equipment— than ever before.  Bigger farms require larger buildings to house expensive farm machinery and equipment, offices, livestock, and crop storage.

The solution is prefab buildings for agriculture.

While building barns of wood may have made sense 100 years ago when virgin forests were plentiful and farm “equipment” meant a horse and a plow, modern farmers need up-to-date structures to house and protect all the massive tools of their livelihood.  Though sometimes expensive, this modern equipment is often essential to keeping the larger farms productive.

Preserving the durability of all that equipment is of paramount importance, so strong, durable steel farm buildings are a particularly sound investment.

RHINO’s prefabricated metal agricultural buildings provide many benefits for the farm of today.  Our steel buildings are strong, durable, and long-lasting, with an expected lifespan of 50 years or more.

Because framing parts are cut to length, welded into shape, drilled, and marked at the factory, framing erection for a prefab farm building is fast and easy, providing a more predictable—and much shorter— construction timeline.  It is rather like a life-sized version of a kid’s erector set.

As a manufactured material, steel is inorganic.  It is created to precise tolerances, with consistent quality, uniform shapes, and absolutely predictable performance.  Every piece of steel at a given gauge will support a known weight in exactly the same way.

(Wood is organic, and therefore inconsistent.  Wood’s characteristics vary wildly, depending on species, location, tree size at harvesting, and changing moisture content. There is no scientifically exact way to predict the strength characteristics of lumber.)

Steel buildings are much more resistant to damage from termites, fire, lightning, earthquakes, high winds, mold, and aging than pole barns or wood structures.  Since steel is noncombustible, it will not become fuel to spread and intensify a fire, as a wood-framed building does.

Because steel is so strong and predictable, wider buildings are possible without requiring interior support columns.  This not only makes steering large farm equipment inside the building much easier, it means fewer building pieces are needed.  This saves both construction time and labor costs.

RHINO’s standard metal buildings can clear span up to 150’ wide without any interior supports.   However, even wider spans up to 200’ or more are possible with a custom quote.

Building heights up to 40’ are standard, but even taller structures are available with a custom quote.  (If the structure does not require a clear span, an even more economical building can be designed with minimal interior support columns.)

The new larger equipment of the contemporary farm operation often requires wider access into the buildings.  Overhead doors can be ordered in cylinder or sectional styles up to 36’ wide (either with or without windows).  Larger bi-fold and hydraulic doors up to 70’ wide are offered.  Sliding side-to-side doors are also available.  Overhead doors can also be insulated, if required.

Like any other successful business, agricultural operations keep a sharp eye on the bottom line.  For that reason alone RHINO’s affordable metal farm building kits are the sensible solution for agribusinesses.

Steel farm buildings are designed to meet the specifications for the individual and all the building code requirements of that exact location.  All plans are stamped by an engineer licensed in that state.  RHINO steel framing is guaranteed to meet or exceed the design loads for the lifetime of the building.

Any building you require can be designed with RHINO prefab steel framing.  Need a place for crop or hay storage?  A safe place for your tractors, trucks, trailers, cultivators, backhoes, combines, tillers, hay bailers, harvesters, and other implements?  A machine shop to keep all your equipment running at top efficiency?  A stable?  A livestock or dairy barn?  A chicken or turkey barn?  A hanger for your plane or crop-dusting operation?  Office space?  Stables or indoor riding arena?

No one respects the environment and the land more than America’s farmers.  That’s why they’re pleased to know that building RHINO steel structure is the environmental-friendly way to build.

Steel is the most recycled material in the world.  It can be recycled over and over without losing any of its strength and durability.  All new steel contains a high recycled content.

Many farm buildings used in moderate climates may not require insulation.  For those in more intolerant climates RHINO metal buildings can also be very energy efficient.  RHINO’s premier insulation package provides maximum comfort (and minimum utility bills) for any climate-controlled areas within a structure, or for the whole building.  Insulation options can be discussed at the time of order.

Today’s modern farming operation is more business-oriented than at any time in history.  Everything is done to improve efficiency and productivity and to maximize profit.  Agribusiness buildings need the strength, flexibility, and features built into every RHINO pre-fabricated metal farm building.

Life on a 21st century farm is fascinating, challenging, and fast-paced.  The farm cannot slow down for a construction project.

That’s all the more reason to build with our prefab steel building systems.  We can normally deliver your farm building from one of our multiple shipping points across the U.S. in as six to seven weeks.  Some standard sizes may be shipped in as little as four weeks.