The First Choice for Construction in Maryland

In a state known for its leadership and innovation, metal buildings in Maryland make perfect sense.  As the leader and innovator in low-rise construction, pre-engineered steel buildings uniquely meet the construction needs of the region.

A History of Advancement 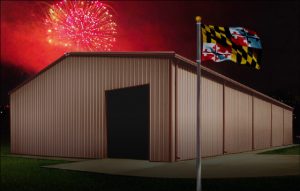 Maryland takes a back seat to no one in embracing the future.  Indeed, Maryland’s history proves that the state often leads the charge for progress.

The following is just a short list of Maryland’s historical achievements:

Obviously, the people of Maryland take innovation seriously.  It is no wonder they appreciate the innovative and practical features of pre-engineered steel buildings.

With all the hustle and bustle of business within the state, construction in Maryland is booming.  Uniquely suited for the times and the sometimes-harsh climate, prefabricated steel buildings rule the low-rise construction market in the state.

Call RHINO Steel Building Systems now at 940.383.9566 for a free quote and expert advice for your upcoming building project.  From one thousand square feet to one million square feet, RHINO’s got all your building needs covered.

RHINO stands out from the common herd of metal building dealers.  Learn more about The RHINO Difference in steel buildings.