Exploring the Difference between Hurricanes and Typhoons

Did you ever wonder what the differences are between hurricanes and typhoons?  Is a tropical cyclone just another type of hurricane? 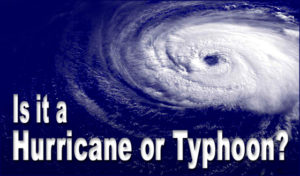 In a bizarre weather anomaly, three potential hurricanes and a typhoon are now simultaneously threatening the U.S. and its territories:

When Do Hurricanes and Typhoons Become Major Storms?

All these storms begin as tropical cyclones: organized, rotating storm systems that develop over warm tropical water.  At their births, meteorologists refer to all tropical and subtropical storms systems as tropical depressions.

If the storm grows in strength, the wind speeds increase.  Once the sustained winds reach 39 M.P.H., the tropical depression upgrades to a tropical storm.  If the storm intensifies to sustained winds of 74 m.p.h., it officially becomes a hurricane, typhoon, or cyclone. 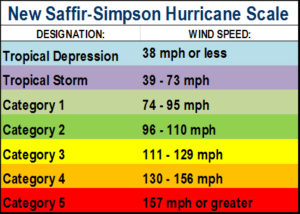 In addition, weather watchers keep a close eye on the barometric pressure of tropical storms.  Pressure drops as storms intensify.

Oddly enough, location is also the difference between hurricanes and typhoons.  Where it occurs determines whether the storm becomes classified as a hurricane, typhoon, or cyclone.

Meteorologists name robust storms originating in the North Atlantic, North Pacific, or Northeastern Pacific as hurricanes. If the same type of storm develops in the Northwest Pacific, it earns the designation of typhoon.

However, tropical storms occurring in the Southern Pacific or the Indian Ocean become tropical cyclones upon strengthening.

Interestingly, a few rare storms have managed to cross the IDL.  When that happens, they retain the assigned storm name, but change classification.

For example, in August 2014, Hurricane Genevieve weakened back to a tropical storm, and then blossomed quickly into Super Typhoon Genevieve as El Nino conditions sent the storm across the International Date Line.

Building to Beat Hurricanes and Typhoons

Residents of coastal areas cringe when hurricane seasons approaches— especially at his time of year, when a major storm peaks.

The only way to fight against nature’s furious storms is to build stronger structures, like RHINO Steel Building Systems.

Pre-engineering these structures to meet— or even exceed— all current local building codes, prepares these buildings to stand up to the storms and challenges of coastline living.  RHINO structures have never been refused a building permit— even in hard-to-meet areas like Dade County Florida.

If you live and work in areas prone to hurricanes and typhoons, consider building with prefabricated metal building kits for your construction projects.

Learn more about our products and The RHINO Difference in metal buildings.  Call RHINO today at 940.383.9566.