Pre-engineered steel buildings are designed and engineered to stand up to damaging winds and other natural disasters.

Which Way the Wind Blows 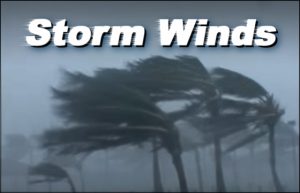 The mid-section of the U.S.— known as Tornado Alley— is best known for its fierce tornadoes. However, every state in the U.S. experiences some tornadoes.

So what is the best way to avoid wind damage?

Building with the Strength of Steel

With the highest strength-to-weight ratio of any building material, steel reigns supreme as the best defense against destructive winds. However, simply being made of steel does not ensure a building will withstand ferocious winds. The quality of the steel structure also determines its ability to withstand damaging winds.

RHINO steel buildings are designed to stand the tests of time and nature. Our structures meet or exceed all current local building codes, including wind loads, for the lifetime of the structure— guaranteed.

If the customer requests even greater-than-code wind resistance, that’s no problem. RHINO wind resistant construction can be designed for 170 MPH wind loads— or even higher, if desired. 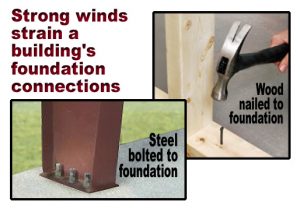 The nails and staples used in wood framing offer little resistance to gale-force winds. Under pressure, these fasteners pull out, allowing the roof to fly off and the walls to topple.

The nails used to secure a typical wood-framed building to the foundation may fail when severe winds blow. Hurricane-force winds could lift the entire structure from the slab and turn it to kindling.

Commercial-grade metal buildings assemble with high-strength bolts, nuts, and screws that provide much greater resistance to winds. In our wind resistant construction, the columns securely attach to the foundation with strong steel j-bolts embedded in the concrete.

Beefed Up Doors for Extra Protection

Other Ways to Increase Wind Resistance

Call RHINO now to speak to one of our friendly steel building specialists and learn more about our wind-resistant steel buildings. Use our knowledge and expertise to create the best structure for your location. You can reach us at 940.383.9566