After the Storm: Hurricane Clean Up

The Daunting Task of Debris Removal after Cyclonic Storms

It is hard to wrap your mind around the scope of hurricane clean up.

At first, just surviving day-by-day, crisis by crisis takes everyone’s full attention after a hurricane. Then reality sets in. Rebuilding cannot begin until the rubble left behind is removed.

What do you do with the great piles of rubbish created by a major storm? 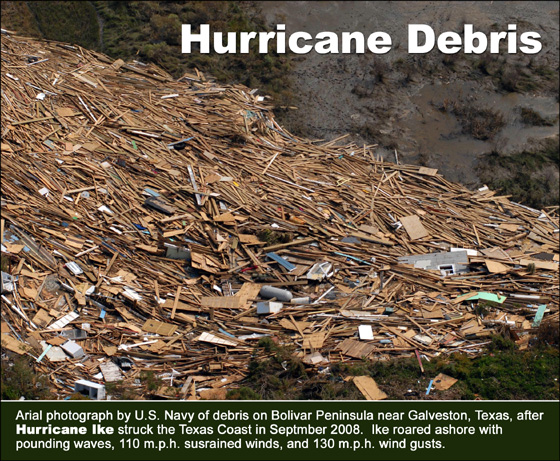 In Mecklenburg County, North Carolina— 200 miles from Charleston— Hugo created over 400,000 tons of shredded trees, shrubbery, and landscaping— ten years of green waste generated in just three hours! It took 16 months to complete mulching the vegetation as part of the hurricane clean up.

Hugo annihilated 70% of the trees on the Francis Marion National Forest in South Carolina— six billion board feet of lumber was lost.

Hurricane KATRINA produced a debris field covering over 90,000 square miles in 2005! Katrina generated an estimated 855 million square feet of debris. That astounding figure does not include the additional construction and demolition waste produces as a natural part of rebuilding.

Hurricane IKE generated so much debris on the Bolivar Peninsula near Galveston, Texas, that FEMA (Federal Emergency Management Agency) provided Galveston County with a $15.7 million hurricane clean up grant. (See photo above.)

Hurricane SANDY, the largest storm every recorded in the Atlantic Ocean, pounded New York and New Jersey in 2012. Sandy left 55.8 million cubic feet of debris in her wake. That is about seven years of normal landfill space.

New York debris removal after Sandy cost the city about $100 per cubic yard!

RHINO designs structures with wind loads as high as 170 m.p.h. or more for hurricane-prone regions. Our buildings will meet or exceed every present-day building code— even in Dade County, Florida— guaranteed for the LIFETIME of the structure.

Call RHINO now at 940.383.9566 for more information on hurricane-resistant metal buildings. Get a RHINO quote for your next low-rise commercial and industrial project in a hurricane-prone area.