As We Honor Those Who Have Served Our Country So Faithfully

The history of civilian aircraft hangars follows closely behind the development of military hangars.  In fact, it would be difficult to separate any aviation advances from military aircraft improvements. 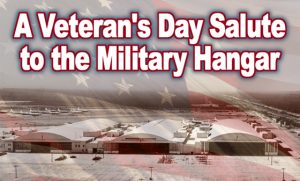 As we celebrate both Veteran’s Day and National Aviation History Month this month, let’s look at the history of military hangars in the U.S. and the aircraft they housed.

You might expect airplane shelters to be the origin of modern hangars.  However, balloons preceded planes in warfare.  Here are some other quick facts from military flight history:

Early aircraft were small by today’s standards.  They were generally housed in hastily constructed wood sheds.

Shortages of steel experienced in World War I forced the Navy to use wood for some hangar construction.  Few of these hangars survive today.

Hangar 1 at the U.S. Naval Air Engineering Station in Lakehurst, New Jersey became one of the first of the mighty steel military hangars.  Completed in 1921, the 807-foot by 268-foot by 172-feet high monster hangar covers over 211,000 square feet.

Hangar 1 gave birth to the Navy airship USS Shenandoah.  This massive dirigible weighed 77,500 pounds.  It was over 93-feet in height and carried six machine guns and eight 500-pound bombs.  The Shenandoah stretched 680 feet in length.  It was also the first rigid airship to use helium rather than hydrogen.

The Expansion of Military Hangars

Steel is by far the most common construction material today for military, commercial, and civilian hangars.  Steel hangars, however, are certainly not new to the armed forces.   The U.S. military constructed its first steel hangar in 1916!

RHINO’s Thanks to the U.S. Military

Here at RHINO Steel Building Systems, we would like to thank our veterans from all branches of the military for their selfless service.  You are all true American heroes.

We also appreciate the men and women now serving so valiantly today, both at home and around the globe.  You are an inspiration.

In addition, we would like to salute those often-unsung heroes who design and build hangars and other U.S. military construction projects around the world.  Your expertise and dedication is truly respected by those of us in the construction business.  May your structures stand strong and stand long!

If you have the need for a prefabricated steel hangar or other metal building, please call RHINO at 940.383.9566.

Have a peaceful and perfect Veteran’s Day!