What Causes Those Unsightly Drywall Dimples?

Drywall nail pops probably cause builders more wasted time on callbacks than any other problem.  These insidious pitted places on formerly perfectly finished walls can be the bane of a builder’s existence.

The builder is trying to focus on his next project.  Yet, callbacks from unhappy owners of his previous projects distract him from the project at hand.  These former clients are grumbling about the unsightly bumps and blemishes appearing on their walls. Learn how to fix popped nails in drywall below. 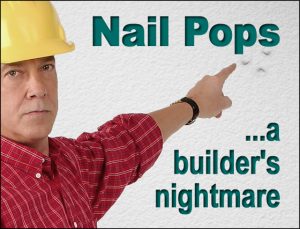 What Are Nail Pops?

Lumber alters shape as its moisture content varies.  As moisture content fluctuates, all three axes of a wood stud— length, width, and depth— shrink and expand at different rates.  Consequently, the studs in wood framing actually move and change shape.

Over time, the wood studs twist, warp, crack, or creep.  The movement causes nails to back out of the wallboard and “pop” through the finish, cracking the wall’s textured coating and paint.

Other sources of nail pops include:

How Do You Deal with Nail Pops?

There are two basic ways of fighting nail pops: treatment or prevention.

Treatment involves fixing the popped drywall nails as they appear.  Here’s how:

Needless to say, avoiding nail pops by prevention is the easier course.  Employing an experienced drywall contractor presents one option.

However, the best way to dodge nail pops and drywall cracks is to build with steel framing instead of wood.

First, prefabricated structures like RHINO’s steel buildings do not use nails.  Everything in a steel building kit connects with bolts, nuts, or screws.  Screws simply do not back out as easily as nails do.

Secondly, steel is an inorganic material.  Steel does not absorb moisture, nor does it change shape with temperature variations.  Steel buildings go up straight and true— and they stay that way for the lifetime of the structure.

Steel frames up at 25-foot intervals, instead of the 16-inch spacing of a typical wood building.  Consequently, steel buildings place far less stress on the foundation, drastically reducing the chance of the structure settling.